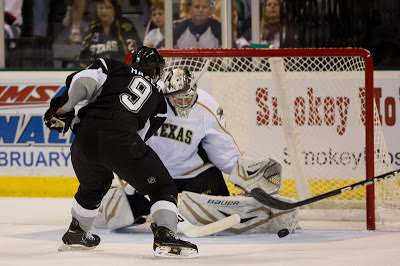 The Dallas Stars announced two moves this morning as the entire AHL moves into the All-Star Break. First, due to the injury of Cristopher Nilstorp last night in Dallas, the Stars have recalled Richard Bachman. Bachman will backup Kari Lehtonen on Monday. Nilstorp was officially placed on the injured reserve this morning, which makes him ineligible for game action for seven days. Texas will not look to recall a backup for Jack Campbell immediately, since the Steelheads have a game today and Texas doesn't play again until Friday.

Additionally, as the Stars are now overstocked on defensive bodies, the club sent Jace Coyle back to the Idaho Steelheads. The addition of Carl Sneep made this move possible. The Steelheads will really appreciate the help, currently skating a forward on defense to make ends meet.