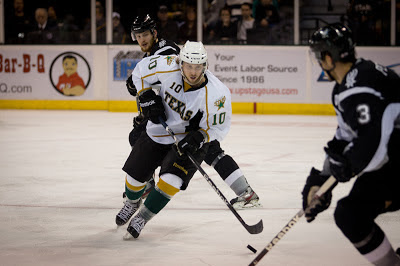 Justin Dowling scored his first professional hat trick to power the Stars 4-1 victory over the San Antonio Rampage tonight in front of a sellout crowd.

"The bounces were all going my way tonight. I gotta give all the credit to my linemates. We've really been clicking.," said Dowling. "The crowd was going wild, and the fans were behind us."

The final game before the All-Star Break for both teams saw Texas jump out to a two goal lead off even-strength goals from Dowling in the first. San Antonio cut the lead in the second but Dowling answered on the power play to complete the trick.

Richard Bachman got the start at home, stopping 25 of 26 overall. The win gives Texas two points to push them past the Checkers and into first place in the West at the break. Coach Desjardins is happy with where they are but knows the road is long ahead of them: "The more points you can get before the All-Star Break the better. It's so much harder to win after the All-Star Break."

Dowling started his night at the 11:45 mark of the first period. A slick pass from Mike Hedden found Dowling all alone in front of the net.

"The first one was just an unbelievable pass by Hedden," said Dowling. "I just faked the shot, tried pulling it [back] and waiting him out. He left upstairs open, and I was able to tuck it in."

In the dying second of the first, Dowling got his second.

"On the second one, I was looking to pass to Hedden, but the defenseman took him away. I thought about going upstairs but got it under his glove."

The Rampage would get one back in the second as Greg Rallo found Casey Wellman unmarked in the left wing circle, where he slapped it home past Bachman for the 2-1 score. The power play goal would be the only tally of the night for the Rampage, however.

Dowling completed his hat trick in the third as a shot from Maxime Fortunus ping-ponged in front of the net and was tapped home by the young winger. Hats rained down from the sellout crowd.

"[Dowling's line] is a good line," said Desjardins. "Chiasson has played really well for us and has stepped up since the end of the lockout for us as a leader. Hedden scored 19 goals in this league last year. He's talent and can play well. They seem like a good fit."

After forty, Texas locked it down as they tend to do. The Rampage sent 13 shots at Bachman, but he turned them all aside. San Antonio would pull Markstrom with just over a minute and half left in the game.

Toby Petersen sealed the deal in the final thirty seconds with an empty net goal. Antoine Roussel and Matt Fraser assisted on the goal. The point for Fraser extended his point streak to nine games.

Bachman had nothing but praise for the team in front of him after the game: "This group has a ton of character. I saw it in Peoria; I saw it in Rockford. Also, they're unselfish. The pass to Petersen at the end: most guys would have shot that."

Texas now takes a break as the league celebrates the All-Star Game in Providence. The Stars will next be in action on Friday, February 1st at Houston.

* - Texas dressed 18 skaters tonight but did not play defenseman Jace Coyle for a single shift. As a result, he was removed from the gamesheet after the contest.

Tonight's attendance was 6,863. This was the Stars' first sellout of the season.