Idaho Steelheads Report: "Fyten" Their Way Up The Standings 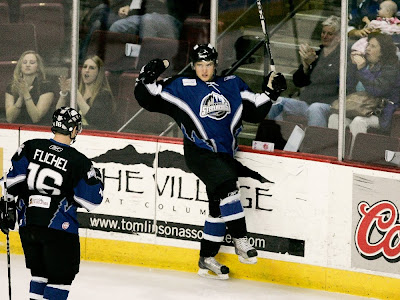 Idaho Steelheads rookie Austin Fyten was just one fight short of two Gordie Howe hat tricks in the same game last Saturday and he notched a career best 4 point night with 2 goals and 2 assists along with his fight. Justin Dowling (1g 2a) and Stars prospect Tristan King (1g 2a) also chipped in with 3 points each. In fact those three players were the only players on the Steelheads roster to get points during the game. Add in Tyler Beskorowany continuing his strong play, turning aside 30 of 31 shots, and the Steelheads get the lopsided win. One of the big takeaways is how the Steelheads battled having only had 14 skaters available for the game due to some AHL call-ups. Fortunately, the King-Fyten-Dowling line, were able to provide enough scoring for the win against the Western Conference worst Condors. The Steelheads power play continues to struggle, going 0 for 4, however the penalty kill keeps clicking away, going 6 for 6

The Idaho Steelheads and the Las Vegas Wranglers had quick turnarounds and bus trips to Las Vegas, for a 2:05 PST start after both teams played on the road the night before. The Wranglers would get the only goal of the period as Eric Lampe continues to find his way back to the top 20 in ECHL goal scorers this season. But the Steelheads were able to generate 13 shots on net to show that “bus legs” would not be a factor. In the second period Justin Dowling would tie the game up for the Steelheads with a power play goal. Josh Robinson would make some amazing saves in the game to give the Steelheads a chance to win, including a great glove save with about 5 minutes left in the second as well as a brilliant left pad save with 15 seconds left in the third to preserve the victory. Idaho’s Sam Carrick and Las Vegas’ Andrew Sarauer would trade goals in the third, before David De Kastrozza would net the game winner with 1:38 remaining in the game. Only concern coming out of the game was an injury to Andrew Carroll. No word yet as to how bad of an injury he received after getting hit pretty good behind the net on the Steelheads 2nd goal of the game. Not a whole lot in the way of prospects performances in this game other than Robinson saving 34 of 36 en route to the win.

In another odd scheduling quirk, the Steelheads would celebrate the New Year in Las Vegas and then hop back on a bus to travel back to Bakersfield for another matchup with the Condors. This Condors team was markedly different than the one the Steelheads had played on a few days prior, as the Condors made a couple of trades to bring in some new players. However, what didn’t change was the scoreboard, at least for most of the night. The Steelheads Tyler Beskorowany and the Condors Scott Greenham, put on a goaltending exhibition for those in attendance. There would be no scoring until the midway point of the third period when Bakersfield’s Liam Huculak would send a one-timer past Besko to give the Condors a 1-0 lead. But not to be outdone, the Steelheads top line of Fyten, King and Dowling would come back less than 4 minutes later to tie the game and Dowling would get his 12th goal and 43rd point of the season. Neither team scored the rest of the way or in overtime. In the shootout, both goaltenders continued to be spectacular as it would take 9 rounds and a Condors Deron Cousens snap shot to send Bakersfield home with the win. The Steelheads still would gain a point and extend their unbeaten streak to 4 games. Beskorowany made 36 saves on 37 shots plus another 8 on 9 shots in the shootout in the losing effort. Steelheads power play was 0 for 5.

Both these teams will face off again this Friday and Saturday, this time in Boise as the Steelheads finally return home for the first time since December 22nd. The Steelheads will have Austin Smith back in the lineup as he continues on the Yo-yo from Texas to Idaho.