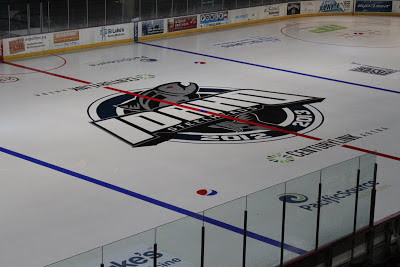 The Steelheads came home this past weekend to take on the conference-leading Alaska Aces (unaffiliated). Friday night was exactly what the doctor ordered. This was the first game since the NHL lockout ended where the Steelheads were facing another team in the same situation as they are. The Bakersfield Condors (unaffiliated) managed to survive with very little roster turnover; the Aces, on the other hand, lost five NHL players.

Idaho jumped out to a 2-0 lead when newly acquired Tyler Gron scored his first goal of the night only to be followed up by Brett Robinson just 51 seconds later. Anyone familiar with the Alaska/Idaho rivalry knows that no lead is safe, but it’s better to play from ahead. Especially when Alaska’s Sean Curry would make it a 2-1 game, just 27 seconds after Robinson’s goal. That’s where the first period would end. In the 2nd period, Idaho’s All-Star Austin Fyten took the game over netting two goals for the Steelheads in the first 2:41 of the period for a 4-1 lead. But once again the Aces would get a goal to make it 4-2. This time it was Alexandre Imbeault with the goal at 4:10 of the second. However, the Aces would pull no closer as David Toews, brother of Jonathan, and Tyler Gron would add two more goals to Idaho’s total as they went on to win 6-2.

On Saturday night, the Steelheads once again jumped out to a lead when Matt Case scored just 2:48 into the 1st period. However, Alaska’s Mike Baran and Alex Hudson would score to give the Aces the advantage until the 18:30 mark of the 1st period when Brett Robinson would tie the game up at 2 as the teams headed to the intermission. The teams would trade goals in the second as Zach Harrison would give the Aces a 3-2 lead, only to have Tristan King answer for the Steelheads to send the game to the 3rd tied at 3. This was a game where the Steelheads should have at least gotten a point out of it, as they played a good team game. There was nothing spectacular about either team, but the Steelheads deserved a slightly better fate. The Aces would get a late power play, and Nick Mazzolini was able to find a very weak spot within the Steelheads penalty kill box. With plenty of time to pick his spot after receiving a centering pass, he made no mistake, and the Steelheads would fall 4-3 to split the weekend series.

After a quick turnaround the Steelheads would have a rare day game in Utah to take on the Grizzlies (Abbotsford Heat). The Grizzlies have been a thorn in the side of the Steelheads for the better part of the last year and a half. With Tristan King and Adrian Foster not making the trip due to some injuries, it appeared as if the Steelheads were poised for an “explainable” loss. The newly reassigned Tyler Beskorowany would have something to say about that before all was said and done. The two teams would trade the first 4 goals of the game as Austin Fyten and Gron got the Steelheads goals, and 46 seconds into the 2nd period the game was tied at 2. Ian Waters would put Idaho up 3-2 at the 6:23 mark of the second and Gron would get his second of the night at 9:51 to make it 4-2. Utah would make it 4-3 before David deKastrozza would get an empty net goal for the 5-3 final.

As mentioned though, Tyler Beskorowany earned his first star for the game. After the Steelheads outshot the Grizzlies 13-11 in the first period, the Grizzlies would outshoot the Steelheads 43-11 through the remaining TWO periods. “Besko” would end up with 51 saves on 54 shots as he bailed out his team countless times late in the 3rd period.

This coming weekend the Steelheads travel into the Eastern Time Zone as they play the South Carolina Stingrays (Providence Bruins) on Friday and face former Idaho Steelhead training camp attendee Ryan Zapolski. Zapolski was a casualty of Texas sending both Beskorowany and Josh Robinson down to Idaho at the beginning of the season. He has also seen some time in the AHL and was named the ECHL All-Star game MVP.

After Friday the Steelheads hop on a bus for a weekend set of games against the Gwinnett Gladiators (Portland Pirates). The Gladiators currently sit second in their division and 4th in the conference.

The Steelheads did get some good news Thursday as the Springfield Falcons of the NHL announced that Patrick Cullity has been assigned back to Idaho after playing 6 games with the Falcons. Cullity will be a welcomed addition to the Steelheads defense which has struggled a bit since the NHL/AHL call-up madness that happened a couple weeks ago. Cullity’s stat line with Idaho this season: two goals and three assists in 22 games played with 24 PIMs and an even rating.

Until next week...
idaho steelheads report