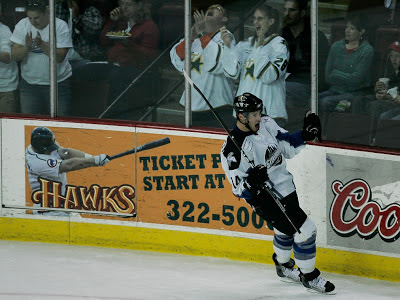 The Idaho Steelheads came out of the All-Star break with a three game road trip to the east coast as they took on the South Carolina Stingrays (Providence Bruins) and the Gwinnett Gladiators (Rochester Americans).

Tristan King
King did not make the trip to Utah to take on the Grizzlies (Abbotsford Heat) back on Jan 21 and once again stayed home for the trip out east with an injury. He has not yet been placed in an IR spot, so I am imagining there is an outside chance for him to be back in the lineup this coming weekend.

Tyler Beskorowany
Since the New Year he has a record of 4-1-1-1 including a 51 save night against the Utah Grizzlies and a brief call-up to the AHL earlier this month.

Josh Robinson
Since the New Year he has a record of 2-3-0-0. He hasn’t seen as much ice time as he did at the beginning of the season, but that is more due to the re-emergence of Tyler Beskorowany as the goaltender that was a contender for ECHL Goaltender of the year 2 seasons ago.

Notes: With the Dallas Stars putting Cristopher Nilstorp on the injured reserve list and calling up Richard Bachman from Texas, one of these two goaltenders are going to get the call to provide back-up for the Texas Stars. If I had to guess, I would lean a touch towards Robinson getting the call, due to the organization wanting to see if he has what it takes to advance to the next level. Either way, the positive for the Steelheads is that one of these goaltenders will still be on the roster and will see the ice just about every game.

The Steelheads made their first trip to South Carolina in their history and the first time that they played the Stingrays since the 2003-04 season when the Steelheads won their first Kelly Cup Championship.

Patrick Cullity was just reassigned to the Steelheads from the Springfield Falcons of the AHL and his presence was immediately felt on the power play as he assisted on the first goal of the game as well as the eventual game winner. Ian Watters and Andrew Carroll got credit for those two goals. Sam Carrick and Austin Fyten scored the other two Steelheads goals. Tyler Beskorowany continued his strong play as he turned aside 37 of 40 shots en route to the win. The Stingrays were able to put 17 shots on net in the first, but Beskorowany turned all of them aside. A late power play goal by the Stingrays in the third period (2 seconds left) made the final score 4-3.

The Steelheads had to work a little overtime on Sunday in order to walk away with four out of six points on the weekend. Andrew Carroll got the game winner in overtime as the Steelheads defeated the Gladiators 6-5 in OT. Beskorowany was back in net and was able to turn aside 30 of 35 shots against. Austin Fyten, Ian Watters, Ben Ondrus, Sam Carrick and James Isaacs scored the five other Steelheads goals en route to the win.

By getting 2 wins and 4 out of 6 points the Steelheads record now stands at 27-11-1-4 which is good for 59 points and 2nd place in the Mountain Division and 3rd place in the Western Conference. The Steelheads trail the Alaska Aces (independent) by 8 points for the Division lead, and lead the Stockton Thunder (Oklahoma City Barons) by 7 points for 3rd in the conference.

The Steelheads continue on the road this upcoming Friday and Saturday as they travel to Stockton to take on the Thunder with a chance to put a strangle hold on 3rd place in the conference.

Until next time...
idaho steelheads report