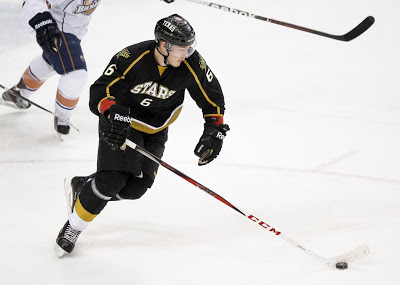 Alright, last one, I promise. Jamie Oleksiak and Antoine Roussel were recalled by Dallas today.

On a four game winless skid, the Stars are looking to shake things up. Texas has enough bodies now to facilitate the callup as well.

Oleksiak, 20, leads all Texas Stars defensemen in scoring with 23 points (3 goals, 20 assists) in 43 contests this season. The Toronto, Ontario native recently played in the AHL All-Star Game in Providence, R.I. where he earned the game-winning assist and a plus-3 rating in the contest. The 6-foot-7, 254-pound defenseman was Dallas' first-round selection (14th overall) in the 2011 NHL Entry Draft. Should Oleksiak make his NHL debut while being called up, he will be one of seven players in the League listed at 6-foot-7 or taller.

Roussel, 23, ranks seventh on the Texas Stars in scoring with 19 points (8 goals, 11 assists) and leads the team with 103 penalty minutes. The Roubaix, France native is looking to make his NHL debut and become the eighth French-born player to skate in an NHL contest. Roussel, who has already set career highs in goals, assists and points this year, was undrafted and signed by Dallas as a free agent on July 2, 2012.

Smith, 21, has gone scoreless in six games for Dallas this season and is still looking to earn his first career NHL point. Prior to being recalled by Dallas, the Toronto, Ontario native skated for the Texas Stars where he currently ranks second on the team in scoring with 25 points (11 goals, 14 assists) in 37 contests this season. Smith was Dallas' third-round selection (69th overall) in the 2009 NHL Entry Draft.