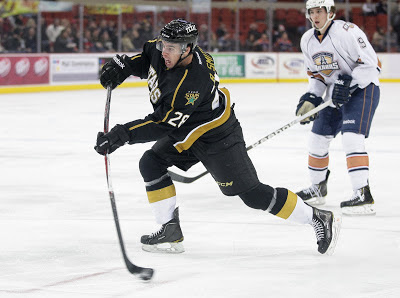 The Dallas Stars are expected to announce this afternoon that they are assigning winger Reilly Smith to the Texas Stars. Smith, who was called up for NHL training camp and has played in six NHL games this season, has zero points and two PIMs with a minus-1 rating in the NHL. In the AHL, meanwhile, Smith is a gargantuan force, scoring 25 points in just 37 games. Despite 3 weeks out of the AHL, Smith is still the Stars #2 scorer behind Matt Fraser.

Smith will continue to boost an ailing forward corps for Texas. The Stars now have options at forward with the additions of Smith, Sceviour and Fyten.

Meanwhile, with Bachman and Nilstorp both in Dallas, Texas recalled Tyler Beskorowany from the Idaho Steelheads in a separate transaction. Nilstorp is on the injured reserve in Dallas and the timetable for his return is currently unknown. "Besko" will get the backup gig behind Jack Campbell, who will have to step up to run the show in the absence of Nilstorp or Bachman.