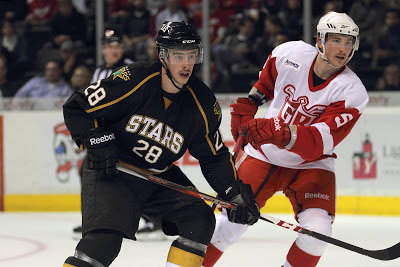 Texas got some well-deserved recognition from the league today as Reilly Smith was named the CCM/AHL Rookie of the Month for December. Smith was a point per game player with eight goals and six assists in fourteen games.

The Stars last had a PotM when Brent Krahn won Goalie of the Month in November 2009. Krahn allowed just seven goals on 210 shots in six appearances on the month, going 5-1-0 with a 1.16 goals-against average, a .967 save percentage and two shutouts.

The Texas Stars, proud American Hockey League affiliate of the Dallas Stars, announced today that left wing Reilly Smith has been selected as the CCM/AHL Rookie of the Month for December.

Smith led the Stars in goals and points last month, tallying eight goals and six assists for 14 points in 14 games.

After a slow start to his rookie season, Smith averaged a point per game during December. On Dec. 2, the Toronto, Ontario native had a goal and an assist in a 4-3 shootout win at Peoria, the first of his five multiple-point efforts on the month. He came back with his first career two-goal game in a 4-1 win over Peoria on Dec. 8, and had a goal and an assist to help Texas to a 3-1 victory at Abbotsford on Dec. 14. Smith put together a six-game scoring streak from Dec. 19-29 that included consecutive game-winning goals on Dec. 19 vs. San Antonio and Dec. 21 at Oklahoma City, and scoring the Stars’ only two goals in a loss to the Barons on Dec. 22.

The 21-year-old Smith was a third-round draft choice by Dallas in 2009, and made his professional debut appearing in three National Hockey League games with the parent Stars at the end of the 2011-12 season. In 32 games with Texas this year, Smith has 10 goals and 10 assists for 20 points, including 10-7-17 in his last 17 outings. He currently ranks second on the Stars in points, is tied for second in goals and in game-winning goals (2) and is tied for third in assists. Smith played three seasons at Miami University (Ohio) and was a Hobey Baker Award finalist last season.

In recognition of his achievement, Smith will be presented with an etched crystal award prior to an upcoming Stars home game. This is the second time in club history that a Texas player has received an AHL monthly award. Former Stars’ goaltender Brent Krahn was chosen as the league’s Goalie of the Month for November 2009.