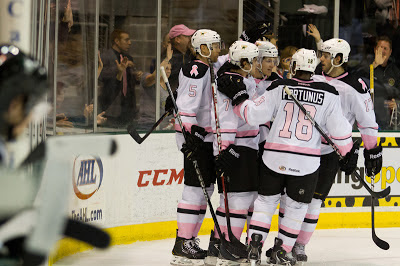 It was a copy and paste effort from last night to this night for Texas as they allowed the first goal and then no more in tonight's game again. After San Antonio scored early in the first, the Stars collected goals from Alex Chiasson, Jordie Benn and Matt Fraser to mark a 3-1 win and extend their winning streak to five games.

"We get scored on sometimes early," said Benn. "But it doesn't affect us at all. We know it's sixty minutes. We just don't quit."

Texas now has a 5-0 record against San Antonio on the season.

"These points are huge against division teams. San Antonio's a big team, but we've been lucky keep them to one goal."

San Antonio's only goal of the night came at the 6:31 mark of the first period. The rebound goal by Drew Shore was assisted by defensemen Nolan Yonkman and Colby Robak. Despite the Stars shots advantage through the period, 12-5, the Rampage were holding serve and playing well.

The air came out of it for San Antonio in the final minute as Alex Chiasson scored off a beautiful drop pass from Reilly Smith. Smith broke into the zone and spun around to protect the puck, dropping it to a hard-charging Chiasson for his seventh of the year. Jordie Benn had the second assist.

Benn would get one of his own on the power play in the second. With two in the box for holding and delay of game, Texas scored the eventual game-winner off the stick of Benn.

"I just saw a little opening there. They always harp on us to shoot the puck, so I just shot it and it went in."

The power play has been on the upswing for Texas recently as the one-time bottom ranked power play in the league is now top ten. The last time Texas failed to score a power play goal in a game was December 21st against OKC, a game the Stars won 3-0.

The Stars capped off their sixty minute effort with a goal in each period. Their third period marker came from Matt Fraser, his team-leading sixteenth of the year. Fraser roofed a Sceviour pass over a diving Dov Grumet-Morris for the 3-1 score. Tyler Sloan picked up the secondary assist, his first point since returning from injury last game.

The Stars now head to OKC overnight to finish the three-in-three. Charlotte's win over OKC kept Texas out of a tie for first place in the league tonight. The Stars have a game in hand over Charlotte, however.

Coach on Dowling: "Dowling was good tonight. We know he's a skill player; I've seen him in the Western [Hockey] League. He'll improve; the pace of the league was a little faster than he's used to, but he'll get better and help us."

Coach on Morin: "Morin is a little banged up. If he's healthy, he's playing. He's a real character player for us. He's just not quite ready, so we'll have to wait and see."