Stars Fall to Rampage in OT 2-1 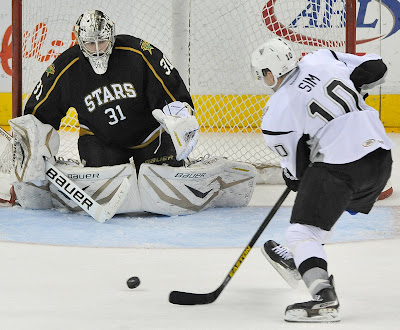 Richard Bachman squares up to a shot from Jon Sim. (Credit: Darren Abate/pressphotointl.com)

Sixty minutes would not be enough for these two clubs as has been the case so many times in the past. Tonight, it was San Antonio coming out on top. Tyler Sloan collected his first goal of the season but a power play tally from Jon Rheault in the OT period sealed the deal for San Antonio's first win over Texas this season. With the single point earned, Texas will maintain its first place ranking in the Western Conference.

Richard Bachman had 25 saves on 27 shots. Matt Fraser extended his scoring streak to eight games with an assist in the second.

San Antonio struck first just over a minute into the game. Texas claimed early puck possession off the faceoff, but the Rampage charged back down the ice and generated a 3-on-1 opportunity. Jonathan Hazen found twine on the Rampage's first shot of the night, beating Bachman on the short-side top shelf.

The Stars outshot the Rampage 12-8 in the period and were down 1-0 after the first.

Texas and San Antonio played throuhg a mostly quiet second period, matching up evenly on shots through the full twenty minutes. However, Tyler Sloan made some noise late in the period to tie things up. Off the rush, Sloan collected his first goal as a Texas Stars, going top shelf on Markstrom with a slick backhand move.

Matt Fraser extended his point streak with the primary assist on the goal and Colton Sceviour collected a point in his first game back with the secondary assist.

The Stars and Rampage traded power play opportunities back and forth in a chippy third period, but neither team could score. Each team collected a point for the tie after sixty and went to overtime.

Jacob Markstrom was splendid early in the OT, robbing Toby Petersen of a solid opportunity in the first few. Alex Chiasson took a hooking call with less than two minutes left in the OT. Jon Rheault, the top scorer for San Antonio, pounced on a loose puck in the crease to seal the Rampage's first win over Texas on the season.

The two clubs will face off tomorrow at the Cedar Park Center.

Both teams only iced 17 skaters in the game.