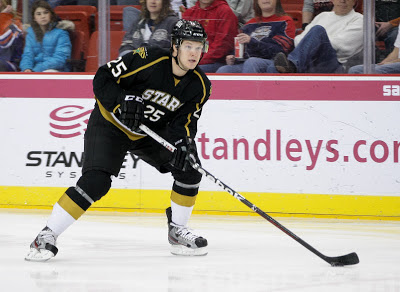 Make that a team-record six in a row for the Texas Stars. On the final game of their weekend three-in-three, the depleted Stars stretched their win streak to six games with a 3-0 victory over the Barons this afternoon in Oklahoma City. Texas has achieved five-game win streaks four times before, thrice in 2009-10 and once in 2010-11.

Jack Campbell picked up his first shutout of the year with 36 saves in the game.

Texas got it done on the power play with Matt Fraser scoring his seventeeth of the year. With the goal, the Stars have now scored a power play goal in eleven straight games. Colton Sceviour added the insurance goal in the third.

Matt Fraser's power play goal was the only marker of the first period. With Andrew Hotham in the box for delay of game, Jamie Oleksiak found Fraser to beat Olivier Roy. Toby Petersen, sliding into that unit in replacement of Travis Morin, collected the second assist.

Texas would be outshot in the period 7-5 but go to the locker room up 1-0.

The Stars played a very quiet second period. There were no goal or penalties int he middle frame as OKC outshot Texas again by a mark of 11-6. Toward the end of the period, Campbell was tested multiple times by the Barons offense but came up solid on all bids against.

When leading after two periods, Texas has a 15-0-0-0 record. Tonight was no exception as the Stars extended the lead on their first shot of the period. Jace Coyle found Colton Sceviour on a nice outlet pass, setting Sceviour free to go forehand-backhand on Roy and score his eleventh of the year. Coyle's assist was his first AHL point of the season in his first game back.

The Barons continued to pour it on, outshooting the Stars 18-5 in the period overall. Texas stood tall with major saves down the stretch from rookie goalie Jack Campbell. Tomas Vincour collected a late ENG to make it 3-0.

The win sets Texas's win streak at six and moves them to 49 points on the season.