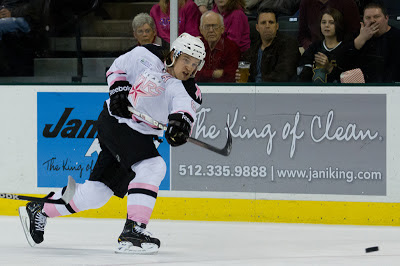 Jordie Benn had his sixth of the year tonight in the Stars' win. (Credit: Josh Rasmussen/Texas Stars)

Houston started it, but Texas finished it tonight in a 4-1 Stars win over the Aeros. After allowing the first goal of the game, Texas had the next four, including two power play tallies and an empty netter. The win extends Texas's streak to four games.

"We had a bit of a slow start," said Travis Morin, who added two power play assists. "But after the first ten minutes, we dominated the game."

Texas only allowed thirteen shots in the game total. Morin added, "We definitely had one of our best games of the year tonight. We didn't give up much. Any time they had it in our zone, we kept it to the outside."

The Aeros put up the first goal of the game at the 6:30 mark of the first. Kyle Medvec had his second goal of the year charging in to slap home a nice pass from behind the goal line by Nick Petersen.

After that point, it was all Stars. Jason Zucker took a four-minute high sticking minor for puncturing Jordie Benn's face, and Texas went to the power play. Travis Morin describes the play.

"[The puck] got up high, and once it got over to my side, I started attacking the net. I think their two forwards got a little too high. Sceviour made a great play at the post to get it over the Fraser."

Sceviour tapped it back to Fraser at the right circle to bomb it home. Matt Fraser's team leading fifteenth of the year tied the score at one. The Stars would close the period tied at one.

Morin's power play unit was up again in the middle of the second off a Fredheim hooking minor. They collected their second of the night to put Texas ahead.

"It was kind of a scrum. I just knew Benn was coming out of the other corner over there so I wanted to lay it out there for him."

The centering pass found twine off the Jordie Benn shot.

Antoine Roussel would cap off the period scoring as Jamie Oleksiak found him up the middle on a partial breakaway. The shot past Hackett's blocker put the score at 3-1.

From that point forward, the Stars locked it down and kept bombing the net.

"We were doing well getting back to the puck," said Morin. "Our forecheck helped out a lot. By the time they got it out, they'd have to dump it and change."

Houston only managed four shots in each of the second and third periods; Texas had sixteen and twelve, respectively.

Cristopher Nilstorp did have to stop quite a few quality shots among his twelve saves, including three breakaways.

The Stars would add one more in the final frame on the empty net. Cody Eakin had his twelfth of the year as he slid the puck into the empty net, shortly followed by himself and a Houston defender, knocking off the net but counting nonetheless.

Eakin had a goal and six shots in the game, skating just as hard as in games one through thirty-five.

Coach Desjardins praised the effort, "Some guys are thinking about NHL camp but they're playing just as hard anyways. That's just credit to their character and who they are."