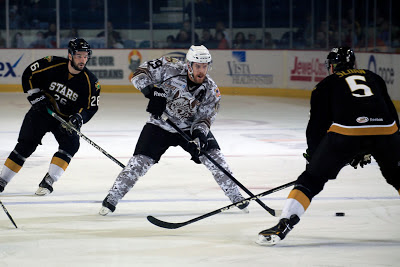 Brett Sterling, pictured above in the Wolves' military appreciation jersey, had two goals on the night. (Credit: Ross Dettman/Chicago Wolves)

Severely depleted by the on-going NHL training camps, the Texas Stars fell tonight to the Wolves at the Allstate Arena by a 4-1 score. Texas only dressed sixteen skaters in the game.

The Wolves and Stars skated to a scoreless first period as each team only managed seven shots in the period. Both clubs had trouble getting their offense going as the clubs worked to size up not only each other but also themselves.

Chicago got on the board in the second period as Brett Sterling picked up his fourteenth goal of the season. The tally was originally unassisted but was corrected to give an apple to Darren Haydar. The assist was Haydar's fifth his last four games.

The teams traded power plays in the period as Chicago outshot Texas 11-6 in the frame.

Brett Sterling collected another goal in the first few minutes of the final period. The puck popped over Gord Baldwin's stick at the point and Sterling was off to the races. Just inside the right faceoff dot, the left winger went blocker side on Campbell.

The Wolves poured on the shots in the third period with the Stars not registering a shot in the period until the midpoint of the frame. Stefan Schneider collected his first goal of the year with seven minutes left in the period to make it 3-0. He broke in unimpeded to beat Campbell.

In the dying minutes of the third, Matt Fraser continued a streak of his own, scoring for a fourth straight game to break up Matt Climie's shutout bid. Texas would pull Jack Campbell to attempt to close the gap. Chicago would add an empty net goal in the final minute to seal their win.

Texas stays at 49 points with the loss. The Stars will likely stay in fourth place however due to the separation they created during the win streak. They will stay in the Windy City to meet the Wolves again on Friday.