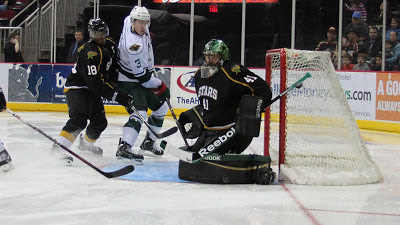 Coming in with just one win over the Aeros on the season, Texas needed to play their game to get two points and start a three-in-three weekend off on the right foot. A 2-1 score, 1/2 effort on the PP and 4/5 effort on the PK was just what the doctor ordered. With the win, Texas claimed their 38th and 39th points of the season, placing them in a three-way tie for fourth place in the conference but sixth overall based on tie breakers.

Texas got goals from Alex Chiasson and Jordie Benn in the contest while Cristopher Nilstorp stopped 25 of 26 for his 13th win on the season. Scott Glennie assisted on the first goal after missing ten games due to a hand injury.

Glennie's assist came early in the first as Jordie Benn's point shot found the net through traffic at 5:36 of the period. Texas led after twenty and dominated the shot count 13-5 overall.

The Aeros fought back in the second as Jamie Oleksiak went to the box in the first minute of the period, giving way to the Aeros power play. Chay Genoway got the Aeros goal much the same as Benn got his in the first, through traffic from the point. Jason Zucker and Mikael Granlund, two likely NHLers once the season begins, got the assists.

Long-time Aero (and 'good friend' of Mathieu Tousignant) Carson McMillan went to the box in the latter half of the second, allowing Texas just their second power play opportunity of the night. It was deadly as the Stars' first line cranked out the ultimate game winner. Cody Eakin slid the puck over the Chiasson on the back door for the 2-1 score.

True to form for these teams, the score after forty held up after sixty. That didn't mean the Stars didn't work for the win. Nilstorp turned away twelve Aeros' shots in the third frame to retain the one-goal lead for Texas. Matt Hackett, who earned third star honors, stopped eleven in the final frame but his offense could not get another goal in the period to take the game to OT.

Texas moves to 2-2-2 on the season against Houston and 17-11-3-2 overall. The Stars will return home to play Peoria on Saturday.