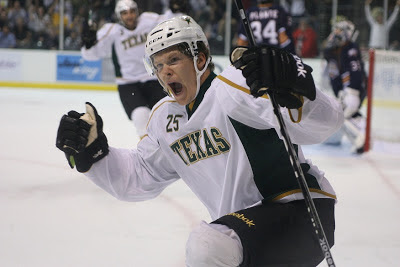 Texas Stars forward Matt Fraser and defenseman Jamie Oleksiak have been named to the Western Conference AHL All-Star team. For Fraser, it is his second selection for the honor after being selected last season in his rookie year. Oleksiak, a rookie, is going for the first time.

The All-Star game and festivities will be held this year in Providence, RI, on January 27-8. Fans are now called upon to select the starters from the roster given, which you can do here. 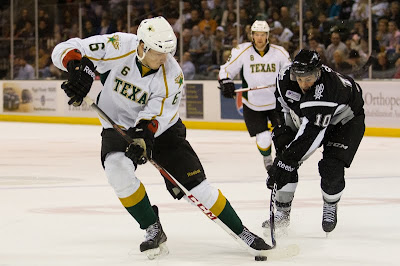 This year marks the second time Texas has had two players named to the All-Star squad. In 2010, Brent Krahn and Ivan Vishnevskiy were named. Only Vishnevskiy played, as Krahn was injured. Travis Morin was selected in 2011, but Francis Wathier played in his place due to callup. Matt Fraser was the Stars lone selection in 2012.

The Texas Stars, proud American Hockey League affiliate of the Dallas Stars, announced today that left wing Matt Fraser and defenseman Jamie Oleksiak have been selected to represent the Stars and the Western Conference at the 2013 Dunkin’ Donuts AHL All-Star Classic in Providence.

Fraser, 22, leads the Stars and ranks fourth in the AHL in goals (18) and is tied for the league lead in power play goals (9). The Red Deer, Alberta native has 22 points (18 goals, 4 assists) and a +7 rating in 39 games played and is one of only two Stars players to appear in every game so far this season. Fraser will be making his second consecutive appearance at the AHL All-Star Classic after playing for the Western Conference All-Stars at the 2012 AHL All-Star Classic in Atlantic City.

Oleksiak, 20, has skated in 38 games for Texas this season, recording 17 points (3 goals, 14 assists) and a plus-6 rating. The 6-foot-7 Toronto, Ontario native was Dallas’ first-round selection (14th overall) in the 2011 NHL Entry Draft. Oleksiak is currently called up with Dallas for the Stars’ NHL training camp.

The AHL announced the two full rosters of the 2013 AHL All-Star Classic Thursday. Each team comprises 24 players: 13 forwards, eight defensemen and three goaltenders. Rosters were determined by committees of AHL coaches, and all 30 AHL teams are represented by at least one All-Star. The 2013 squads feature 33 first-time AHL All-Stars, 12 rookies and 12 former first- and second-round draft choices.

Luke Richardson of the Binghamton Senators and Jon Cooper of the Syracuse Crunch will coach the Eastern Conference All-Star team; Dallas Eakins of the Toronto Marlies and Jeff Daniels of the Charlotte Checkers will guide the Western Conference club.