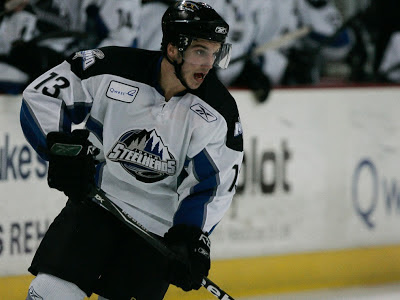 Texas officially announced the recall of Mathieu Tousignant today and added in the signing of left wing Joey Martin, out of the ECHL's Toledo Walleye. Martin, a second year player, had eight games in the AHL last year with Houston. He scored two goal in that time. Both players are expected to be available tonight against Chicago.

The callups are necessitated by the recall of Colton Sceviour and Jamie Oleksiak to Dallas. Neither travelled with Texas to Chicago.

The Texas Stars, proud American Hockey League affiliate of the Dallas Stars, announced today that center Mathieu Tousignant has reassigned by Dallas to Texas from the Idaho Steelheads of the ECHL. Texas also announced that left wing Joey Martin has signed a professional tryout contract and has been called up from the Toledo Walleye of the ECHL.

Tousignant, 23, returns to Texas after playing in 28 games for the Steelheads, recording 19 points (4 goals, 15 assists) and 77 penalty minutes. The St. Etienne-de-Lauzon, Quebec native attended the Stars’ AHL training camp and made the opening night roster, playing in the season opener on October 13th at San Antonio. Tousignant (pronounced TOO-sihn-yeh) was reassigned to Idaho on October 23rd. In 159 career AHL games, all with Texas, he has 37 points (16 goals, 21 assists) and 214 penalty minutes.

Martin, 24, has 19 points (6 goals, 13 assists) and 13 penalty minutes in 29 ECHL games for Toledo this season. The Thorold, Ontario native is in his second full professional season and made his AHL debut during the 2011-12 season with the Houston Aeros, playing eight AHL games and registering two goals. While playing for Houston, Martin faced Texas once last season, coming to Cedar Park Center on January 21, 2012, a game the Stars won 4-3 in a shootout. Martin (5-foot-10, 185 lbs.) played four years of NCAA Division I college hockey for the University of Nebraska-Omaha, where he scored 103 points (39 goals, 64 assists) in 152 career NCAA games.