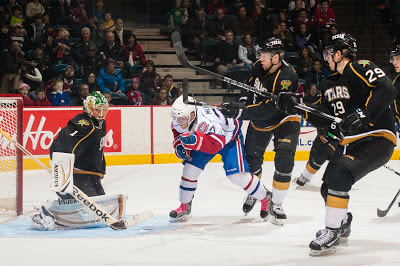 Jack Campbell had a solid night but took the loss off an own-goal. (Credit: Brandon Taylor)

The Texas Stars fell to the Hamilton Bulldogs tonight in Ontario thanks to a bizarre goal and overall lack of offense. Texas scored a second period goal from Luke Gazdic but also put one in their own net on a delayed penalty. A third period goal sealed things as Texas couldn't find the bet again despite out shooting the Dogs 37-23.

Jack Campbell took the loss but certainly deserved a better fate. He had some sparkling stops on three breakaways in the game. Technically, he only allowed one of the goals. He stopped 21.

Texas and Hamilton skated to a scoreless first period that wasn't without its chances. Both clubs had power plays, but Texas had the best chance. Matt Fraser teed up to try for his 12th PPG of the season and pinged the puck off the crossbar. The Stars squandered an extended five on three and finished the period with a 15-6 shot advantage.

Texas got on the board in the second with a Luke Gazdic goal. The follow up of a Taylor Vause shot broke up a scoreless tie.

Hamilton got a very bizarre goal to tie things up. With a power play already on, the Stars earned a delayed call, and Campbell vacated the net. Alex Chiasson sent the puck out to Sneep at the point and he missed it. The velocity on the puck carried it down the ice and into the Texas net. Jason DeSantis got credit for the goal.

The wheels came off in the third. Despite several good opportunities, it was Hamilton with the only goal of the period. The rebound chance by Pateryn set the score at 2-1. Texas tried to get back in it but took a late penalty to stop their momentum and then couldn't find the net with the extra attacker.

The Stars will stay up north, facing Toronto tomorrow.