Despite Comments to The Contrary, Roussel Right Back With Dallas 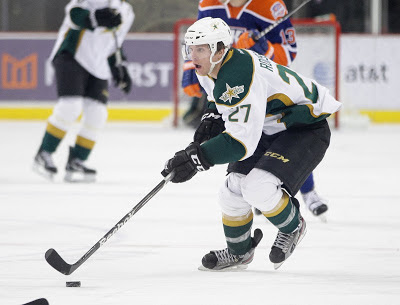 That didn't last long. Antoine Roussel has been called up to the NHL after just two games in the American League this weekend. The forward played in both games in Ontario. He had no points and was minus-1.

It is a confusing callup after comments by Dallas head coach Glen Gulutzan yesterday. "We thought he could play some down there," Gulutzan told the Dallas Morning News. "He’s still got some things to learn at this level. We have to be disciplined. “Did that have anything to do with (Roussel) going down? There are still things he needs to learn. We have to be a disciplined team. That’s not just for Roussel. It’s for the whole group."

With a three-game road trip coming, Dallas wasn't comfortable with their situation in case of injuries. They wanted an extra body and determined that the best player for the role is Antoine Roussel. In terms of NHL experience, Roussel is probably the top choice for Dallas. Colton Sceviour, who could also play the fourth line role, has only two games of experience.

Texas loses a forward and is now down to 12 healthy forward skaters. Glennie and Morin continue to be out with injury. Austin Fyten, scratched over the weekend with Roussel's return, would figure into the lineup, barring any other changes.
dallas stars roster moves