Power Play No Help To Stars in 2-1 SO Loss 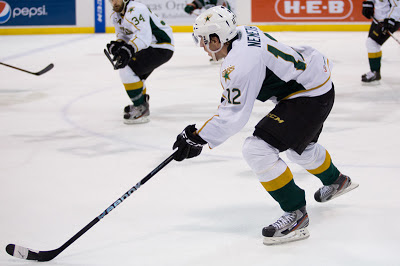 After a solid outing in Toronto, the Stars struggled to find the net at home, losing a 2-1 game in the shootout to South Division rival Houston. The Stars scored the first goal off the stick of Patrick Nemeth but allowed a shorthanded goal and fell 3-1 in the shootout.

The Stars were certainly affected by guys moving in and out of the lineup tonight. Colton Sceviour was injured in Toronto and did not play while Antoine Roussel was called up to Dallas yesterday. "It makes a difference for sure how much you've played [together] and the confidence of guys in their positions," said Coach Desjardins. "When we get all our guys back, it definitely helps us on the power play."

Desjardins referenced the power play as Texas squandered a large man-advantage opportunity early in the game. In the last meeting between these teams, Mike Hedden put a hit on Paul Mara that was not penalized in game but earned Hedden a one-game league suspension.

Just twenty seconds into the game, Mara slashed Hedden and then tried to fight him. The Texas winger wouldn't give in and Mara earned a rare 7-minute penalty, two for slashing and five for fighting. He also picked up a ten minute game misconduct.

"We struggled on the power play," said Patrick Nemeth. "I think you've got to score on a seven minute power play."

The Stars were ineffective over the first half of the power play and then stoned by Matt Hackett in the second half of it.

"We started to play better after the penalty," said Desjardins. "Right at the start of the game, they got their work ethic going because you get that on the kill and not on the power play."

"I jumped up the left side and put a high shot on his left shoulder."

That puck trickled in behind Hackett and set the score at 1-0 after twenty minutes.

Houston would get one back on the kill in the second as Carson McMillan dashed down the right wing boards and fired one five hole on Nilstorp to tie it up.

The Stars had a lot of shots through the game but not enough chances. Said Desjardins, "We're not creating as many chances as we need to." Texas outshot Houston 37-17 in the game including 11-4 and 15-5 advantages in the second and third periods.

The Stars took it to an overtime period where they outshot the Aeros 3-2. In the shootout, Zack Phillips, Johan Larsson and Justin Fontaine scored for the Aeros while Alex Chiasson had the only goal for Texas.

With the 'loser' point, the Stars ensure that Charlotte cannot catch them for first place before Friday's Stars' game against Oklahoma City. Charlotte faces Chicago on Thursday and is idle Friday. The Checkers have 61 points to the Stars' 64.