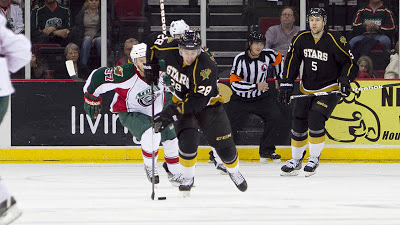 Reilly Smith had two assists in his first game back from Dallas. (Credit: Morris Molina/Houston Aeros)

Houston would score first, but Texas would surge back to score two and win their 27th game of the season. The newly reassembled line of Matt Fraser, Colton Sceviour and Reilly Smith was on the ice for both Texas goals. Tyler Sloan had his second of the year for the game-winner and Matt Fraser extended his point streak with a goal and an assist. Reilly Smith had two assists in his first game back from Dallas. Jack Campbell stopped 17 of 18.

The Aeros struck first as Johan Larsson had his 12th of the year on the power play. The cross crease pass completed by Larsson was the only goal of the period.

After Houston led the shots in the first period, they only managed one shot in the second period. Texas didn't manage too many more but got seven on the net. Neither team would beat the respective tender in the period.

Despite all previous tendencies, Houston led after two periods but lost the game. Matt Fraser scored off a second effort to tie the game in the third period. Smith and Sceviour assisted on the play. Tyler Sloan scored with eight minutes remaining in the period off a goal that was reviewed. Reilly Smith setup Sloan for a beautifully roofed puck. The play was called a goal and set the score at 2-1 Texas.

Kuemper would be pulled for the last 56 seconds but ultimately took the loss, as Houston could not score to tie the game.

Texas is now idle until Tuesday against Rockford in Cedar Park.