Posted by Stephen Meserve on April 05, 2013
The Stars had a brilliant three minutes to go up 2-0, but the Barons used all of the remaining fifty-seven to sneak back into the game and defeat the Stars by a 3-2 final tonight. Brett Ritchie's first professional goal opened the scoring, and Mike Commodore's first as a Star came next. However, two Barons' goals in the last five minutes of the game started Texas' three game weekend with a deflating loss.

"We were ready. The first five minutes of the game we had good tempo," said captain Maxime Fortunus. "We may have stopped moving and putting pucks to the net. Every time you get a chance to put a puck to the net, you have to do it."

The Stars outshot the Barons 13-6 in the first but then capitulated in the second to be outshot 15-6.

"They had a really good second period," said Coach Desjardins. It was the third that killed the Stars though as a goal just as a penalty expired set the score tied at two and a hopeful shot tipped off Jack Campbell's glove and won the game 3-2 with 14.6 seconds left.

"It hurts to lose that one," added Desjardins.

Brett Ritchie opened the scoring early in the game as a hounding effort by the rookie winger earned him his first professional goal in just his second professional shift. Through a sea of sticks and legs, Ritchie found a puck off a rebound and backhanded it into a gaping net for the 1-0 lead. He was assisted by linemates Mike Hedden and Justin Dowling as he replaced Alex Chiasson on that line.

Mike Commodore also scored his first as a Star and notched his first Texas tally only 61 seconds later. The Stars developed a 3-on-2 with Reilly Smith and Colton Sceviour leading the charge. Sceviour dropped a pass for Mike Commodore who blasted the puck past Danis for the 2-0 lead.

Texas kept tempo up through the remainder of the period to the tune of a 13-6 shot advantage. The Barons picked up where the Stars left off in the second period. "Our tempo went down," said Fortunus.

The Stars were bailed out by Jack Campbell in the second during their power play as the top-ranked OKC power play poured on the chances.

"They have guys who can move the puck well. They also aren't afraid to shoot the puck to the net and crash it."

Curtis Hamilton scored the Barons' first of the night on a breakaway as Campbell dove to collect the puck as it slid underneath him and into the net. The period would end at a 2-1 advantage for Texas.

The Barons and Stars were evenly matched on shots in the third but a power play for OKC was the difference. That top-ranked PP didn't exactly score but Phillipe Cornet popped the puck in cross-crease on Campbell just three seconds after it expired. With less than five minutes left, Texas had completely squandered its early lead.

With overtime seeming imminent, the Barons completed the comeback with just 14.6 seconds left. Tanner House's shot tipped off Campbell's glove and slowly dribbled into the net. Campbell threw his glove in the air in disgust at its betrayal. The Stars would not be able to win the ensuing faceoff and OKC completed the comeback bid. It was the first time Texas had lost in regulation when leading after forty minutes.

"You never want to give up goals that late in a game or period," said Fortunus. "We need to make sure we stay solid for a full sixty."

Texas stays at 89 points with the loss and has a chance to get right back on the horse tomorrow against bottom-ranked Hamilton.

There were a lot of scratches tonight. Coach Desjardins had to make a lot of tough decisions. "I can't get them all the ice they deserve. They all deserve ice, and I can't do it for them. We have to find out what the new guys can do and then make a decision on the defense." 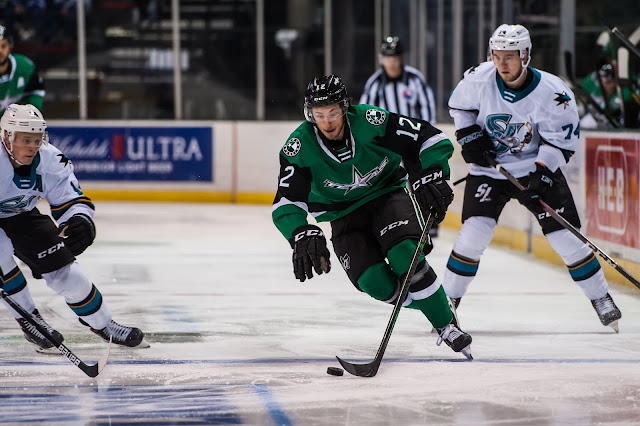