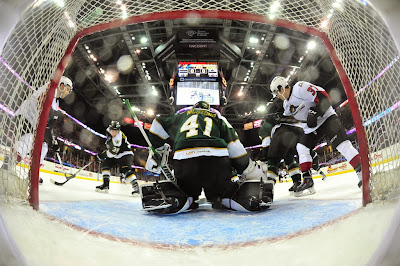 Despite it being a matchup between the first and last place teams in the Western Conference, the Lake Erie Monster gave Texas a run for its money at Quicken Loans Arena this morning with the Stars coming out on the right side of a tight 2-1 score. The league's leading power play did the job, getting two on the day. Both units scored with the tallies coming from Mike Hedden and Curtis McKenzie.

Cristopher Nilstorp stopped 32 of 33. The Stars had a perfect 6-for-6 performance on the penalty kill. The Stars improved their record in matinee games to 5-6-1-1 on the season.

Mike Hedden opened the scoring in the first period with a slick shot off the right wing circle on the power play. With Garrett Meurs in the box for tripping, Hedden scored his 20th goal of the season, setting a new AHL career high tally. Quietly, he is having a career year behind the 'headline grabbing' top line players.

Meurs made up for his trip a few minutes later with an even-strength goal to tie the score at one after the first period.

Curtis McKenzie provided all the offense the Stars would need the rest of the way with his 19th of the season in the second period. One of just nine shots in the frame and an abnormally low 21 overall for Texas, the goal came on the power play. Colton Sceviour's initial shot rebounded hard off Calvin Pickard to a waiting McKenzie, who potted the 2-1 marker. Travis Morin had the second assist.

Lake Erie kept the pressure on until late, when two consecutive slashing calls in the final five minutes of regulation shut down any chance of a comeback.