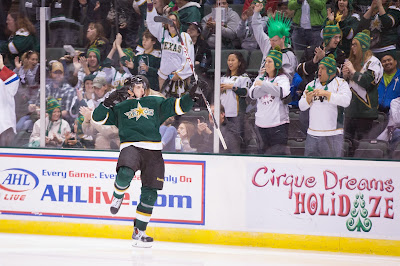 Curtis McKenzie is a huge difference maker at the AHL level, and he proved it tonight. The winger was on the ice for every one of the Stars' goals and scored the game winner in Texas' win against Iowa tonight in Cedar Park. After losing eight straight, the Stars beat the Iowa Wild 4-3 and never trailed in the game. The Stars last collected a full two points on November 8th.

"It shows how tough it is to win in this league," said Coach Laxdal. "When you're at the bottom of that curve trying to get a win, teams feast on you a bit. Give our guys credit for getting that fourth goal and defending to win."

After starting on a line with Justin Dowling and Scott Glennie, McKenzie switched over to the Travis Morin and Brendan Ranford line. He was a sprak plug on both lines and scored the game winner in the third period despite starting the day in Dallas.

"I got back just in time for pregame meal. I got to fly this time though," said McKenzie, who is racking up the frequent flyer miles this season.

It's a interesting adjustment for McKenzie, who has a very different role in Dallas than here in Cedar Park, where he says he takes "more offensive risks."

With the win, Texas collected four of six points in their three-game Thanksgiving stretch. They also get a little bit more confidence and swagger into the locker room.

"If you saw Jussi [Rynnas] there after the game, I thought we won the Calder Cup again," said McKenzie. "You gotta love guys that compete that hard."

Coach Laxdal added, "That winning feeling in the dressing room is outstanding. That passion brings confidence. Confidence is huge and hopefully this can breed confidence in the team."

The Stars' power play struck first in the contest. Three shots in rapid succession came as Greg Rallo drove the net hard. Rallo was the one who finished the play, roofing the puck over Jonas Gustafsson for the 1-0 lead. Julius Honka went next, slamming one home from the point off the pass from newly-arrived Curtis McKenzie.

"We try to play the puck to the net and shoot as much as we can," said Honka, who claimed he didn't have a spot picked out on the goal. "Hopefully it went in."

Iowa would cut the lead later in the period though. Christian Folin would beat Rynnas up high to set the score at 2-1. The Wild appeared to have another goal as the first period ended, but time expired before the puck entered the net. It wouldn't matter that much as Iowa would get their goal back as the second period opened. Zack Mitchell was the benefactor of a poor play by Jussi Rynnas. The Finn netminder went to play a dump-in at the right wing circle and left the puck Jordan Schroeder, who easily fed the puck right to Mitchell. He buried the shot for the 2-2 tie.

Just as quickly, Travis Morin charged in off the faceoff to beat Gustafsson high on the far side, picking a corner from a shallow angle. There were just ten seconds between the two goals.

Michael Keranen evened things up later in the period with a rebound on a loose puck in Rynnas' crease. The score was tied at three heading into the final period of play.

Curtis McKenzie's big goal pushed the Stars ahead for good in the final period. Off the beautiful pass from Brendan Ranford in the corner, a streaking McKenzie on bent knee wired the puck past Gustafsson on a one-timer.

"It was a pass to me," said McKenzie. "I was screaming the whole way down the ice that it was for me."

Texas locked down the defense in the final ten minutes allowing just seven Iowa shots in the entire third period. The Stars were perfect on special teams to boot. They scored on their only power play and shut down the Iowa power play on two tries.

The Stars will next play Utica at home on Wednesday.