Texas Stars Will Move to Pacific Division in 2015-16

Well, this is big news. In something of an unexpected turn, the Texas Stars are changing divisions and joining up with the new California teams to form the AHL's new Pacific Division. It wasn't unexpected that Texas would change divisions; that's happened many times before. It was unexpected that it would be with the West Coast teams.

San Antonio will also play in the division, which features all five California-based clubs and both Texas teams. The remainder of the old West Division is in the AHL's Central Division. Full detail below.

No information is available on the number of games played total, games against each opponent or the Calder Cup playoff format. You have to imagine that the playoff format will definitely change. This was unexpected as the league looked set to put all five Cali clubs in their own sequestered division.

Stock up on caffeine, Stars fans. 9:30 PM Central Time starts for a large number of this club's games are coming to an away schedule near you... 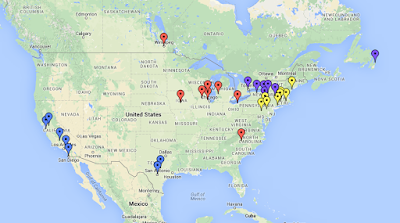 
American Hockey League President and CEO David Andrews announced that the league's Board of Governors, convening for its Spring Meeting today in Chicago, Ill., has approved its division alignment for the 2015-16 AHL season.

The Texas Stars will compete in the Pacific Division against the Bakersfield Condors, Ontario Reign, San Antonio Rampage, San Diego Gulls, San Jose Barracuda, and Stockton Heat. The seven-team Pacific Division is part of the Western Conference. Texas is the AHL affiliate of the NHL's Dallas Stars.

The AHL's full divisional alignment is as follows (NHL affiliate in parentheses):

The format for the 2016 Calder Cup Playoffs will be finalized by the Board of Governors at its Annual Meeting in Hilton Head Island, S.C., July 6-9, and the complete playing schedule for the 2015-16 regular season, which begins Oct. 9, will be announced later this summer.

around the league division offseason the business side