McLaughlin Happy to Announce Rebrand Half a Year in the Making 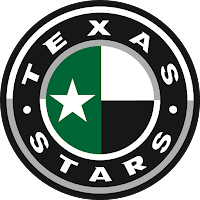 I got a few minutes to chat with Texas Stars president Rick McLaughlin this afternoon about the new team rebrand. He's obviously relieved to have the new colors and logos out the door after a many-months long project to get the rebrand done.

The process started as soon as the team was purchased last season. Texas got in touch with Reebok to communicate that the team was looking at a rebrand for 2015-16. Representatives from Dallas and Texas got together with folks from Reebok to create some options. The top three were presented to Tom Gaglardi and he had the final decision. McLaughlin noted, "The consistent theme was victory green."

Texas will be able to play 2015-16 in their new jerseys, which will be released later this summer. The deadline that had been much discussed at the time of purchase had to do with the new California-based teams. Reebok had to ensure they could create new jerseys for all five of those teams before putting Texas in queue. As McLaughlin noted, Texas could play another season in their green and gold but Ontario couldn't play in Manchester's jerseys, so they took priority.

As far as retail availability, the goal is the first home game, but McLaughlin would love to have some ready for Dallas training camp, which will be held in Cedar Park for the first time this season.

Dallas and Texas synergies in the front office

At the end of our chat, McLaughlin and I discussed the overall connections that are happening now between Dallas and Texas front offices, now that they are under the same roof. McLaughlin said that they are having a great experience, sharing best practices and doing some cooperative hiring. Dallas has already recommended several candidates for hiring in sales and marketing roles in Cedar Park who are potential 'call ups' for the Dallas Stars in the future.
the business side