Posted by Stephen Meserve on June 11, 2015
The Texas Stars announced this morning a complete rebrand of their franchise to match the Dallas Stars color scheme, including the addition of victory green to the palette.

"The colors and themes have worked so well in Dallas, and they've become synonymous with Stars Hockey," said Dallas Stars and Texas Stars owner Tom Gaglardi. "It's exciting for us to have the Texas Stars represented in the same victory green that we take great pride in."

The color scheme change was expected after the Dallas Stars' owner, Northland, purchased the Texas Stars last season. With the change, Texas has completely abandoned the gold trim that was part of both Dallas and Texas jerseys in the past. Texas has revamped its website and all connected collateral with those assets launching this morning as well.


Along with the logo, new jerseys are expected later this summer. It is also expected that Texas will compete in these new jerseys in the 2015-16 season. Texas has had two main jersey treatments in their history, the initial TEXAS and STARS wordmarks on white and black respectively and the current kelly green and gold jerseys. With victory green such a big part of the rebrand, it can be expected that Texas will don that shade in some regard next season. For the Dallas Stars, victory green is the home jersey.

See below for the full style guide. Click to expand. 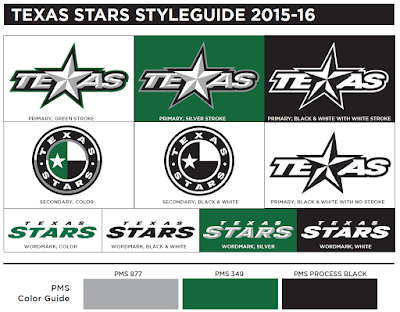 (In other news, looks like I might need to do a 'franchise rebrand' of my own to match.)
the business side