Posted by Stephen Meserve on September 19, 2015
After the switch to victory green for logos and wordmarks over the summer, the impending jersey change was the next on the docket for the Texas Stars. Last night, the team revealed their new duds, along with inadvertently dropping a surprise announcement.

Travis Morin and Julius Honka debuted the jerseys at the Stars Party at the Domain last night. Jerseys are on sale now. 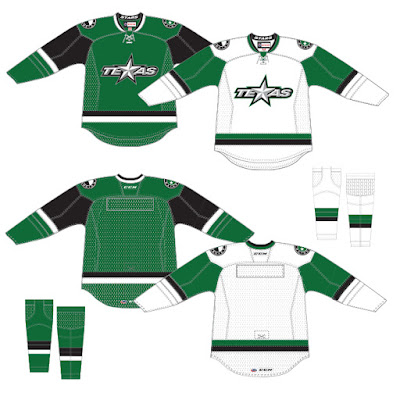 The surprise announcement that I'll have more on today was the announcement of Travis Morin as the fourth captain in team history.


The Texas Stars, American Hockey League affiliate of the NHL’s Dallas Stars, unveiled their new jerseys for the upcoming 2015-16 season at the Stars Party at the Domain tonight.

The club’s jerseys continue their transition to the Victory Green color scheme announced earlier this summer along with their new primary and secondary logos. Narrowed down from more than 30 design options, the new sweaters feature striping around the arms and bottom, the circular secondary logo on the shoulders, and black pants.


The team’s new jerseys will be on sale Saturday at the Texas Stars Team Store at Cedar Park Center.

The 31-year-old Morin is the most decorated player in Texas Stars history and hold the franchise records for games played (408), goals (121), assists (237), points (358), power play goals (36) and power play assists (107). The Brooklyn Park, Minn. native has played the past six seasons for the Texas Stars, and is one of the original members from the club’s inaugural season back in 2009-10.