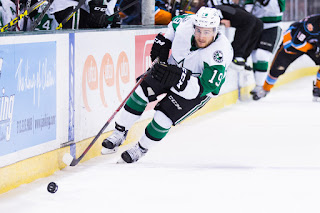 The Dallas Stars announced this afternoon that they have re-signed two of the leading scorers from the Texas Stars to one-year, two-way deals. Justin Dowling and Brendan Ranford each re-upped for the coming season, arguably an obvious decision for the club to make such an offer. Ranford was a stalwart for the AHL side, leading the team in games played with all 76 to
his name and also leading in points. Dowling missed a large part of the season to injury but still ranked fifth in points.


Dallas Stars General Manager Jim Nill announced today that the club has signed center Justin Dowling and left wing Brendan Ranford, each to a one-year contract. Per club policy, terms of the deal were not disclosed.

Dowling, 25, finished fifth on Texas with 46 points (11-35=46) in 52 regular season games in 2015-16. He finished third on the team with his 35 assists, which tied a career high. In four Calder Cup Playoff contests, he tied for the team lead with two goals and was third with three points (2-1=3). The fourth-year professional has posted 173 career points in 229 career AHL games played, all with Texas.

The 5-foot-10, 190-pound native of Cochrane, Alberta was originally signed by Dallas as an undrafted free agent on March 26, 2014.