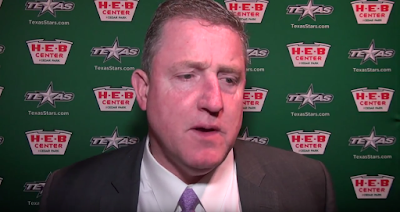 Thinking about the game this morning, I realized that something was different about the postgame interviews that caught me a bit off guard. I began last night's scrum with Coach Laxdal with a rather innocuous question. I noted that everything that went well in the homestand up until last night (goaltending, special teams) didn't come through. It wasn't designed to call out anything in particular and gave Laxdal an opportunity to insert his own opinion on the game, which he usually does.

Immediately, he launched into an answer that impugned the team's effort on the night.

My second question noted that the lineup was depleted. With Julius Honka, Matt Mangene and Denis Gurianov out against a stacked Wolves squad, that could have been an easy out. Laxdal didn't take.

There were more player requests last night because there were more media members present than the usual crew of one (me). To a man, the team called out its own effort. What was striking about this is that the postgame comments for a similar game four weeks ago would have been filled with words like "puck luck" and "bad bounces."

The Texas Stars will make the playoffs because they are finally owning their own destiny. Something clicked over the homestand that made this team realize they have talent and skills to get into the playoffs.

This upcoming road trip, which Texas departed for at 6 AM this morning, will be a huge test. They can either solidify their standing or be completely out of the race by the next time they play at home on March 4th. However, either way, Texas will be doing so on their own merits, as opposed to outside forces. And that is a massive developmental step that you can't read on the boxscore.
analysis