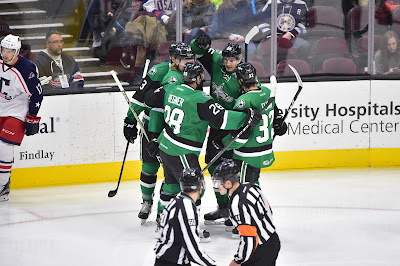 The Texas Stars continued their seven game road trip in their first game of a weekend set against the Cleveland Monsters who have been racking up points in the standings in their last eight games (4-2-1-1). These teams split their series last season 2-2. Stars captain Curtis McKenzie drew back into the lineup as he has been reassigned by the Dallas Stars.

Two players who have needed to contribute more scoring, Denis Gurianov and Justin Dowling, stepped up in a big way to lead help the Stars get the victory against a strong opponent. Roope Hintz also paced his team and finished with one goal and one assist. Landon Bow continued his bid for extended crease time with 28 saves on 29 shots.

The matinee game got off the ground when Andrew Bodnarchuk gave the Monsters an early power play on a holding call. Texas forced awkward zone entries, killed off the penalty, and then drew an interference call on a centering pass by Travis Morin. The Monsters' 15th ranked penalty kill could've served as an early boon to the Stars' woeful power play (26th), but the Stars didn't get anything going and ceded a shorthanded attempt that rang off the post.

Max French committed a slashing penalty that gave the Monsters their second power play, to which the Stars' penalty kill held serve. Jason Dickinson drew an interference minor, which drew the ire of McKenzie who came in late to scuffle with the offending Monsters defenseman John Ramage. The first frame ended with both teams being 0 for 2 on their power plays, and the Stars being outshot 9-7.

Gurianov finally got his first goal of the year in the second period with a tip in to put the Stars up by one. Brent Regner and Roope Hintz recorded the assists on the goal. With the Stars turning up the pressure, the Monsters started to get chippier, and it ended with Samuel Laberge having to drop the gloves with Cleveland forward Jordan Maletta.

After Cleveland tried to create some scoring by piling bodies toward the net, the Stars went on the counter attack and no-one accounted for Hintz. He scored his sixth goal of the year with a snipe from the slot, and followed that up with another quick attempt that almost got past Cleveland goaltender Matiss Kivlenieks. The Stars gave the Monsters their third power play of the game when Gurianov was caught for hooking. Bow maintained his poise, and the Texas lead, by snuffing out a couple of high danger situations.

The Stars were awarded their third power play late in the second period when Regner drew a holding call. Time expired in the period before the penalty ended, and the Stars were outshot the Monsters 16-9 in the middle frame.

Dowling took advantage of some extended power play time in the third period, with the Stars getting some time with a two man advantage. After Cleveland got one of their men back, Dowling netted his second goal of the year ending a sizable scoring drought of his own. Matt Mangene and French gave the Monsters their fourth and fifth power plays respectively, and the Texas penalty kill finally cracked on the first of the two as Miles Koules found the back of the net from the slot and ended the shutout for Bow.

On their fifth power play attempt, the Monsters emptied their net to create a two-man advantage. Sheldon Dries intercepted a pass at the center of the neutral zone and scored into the empty net for a shorthanded goal that put the game away.

The Stars finish this weekend set against the Cleveland Monsters Saturday, November 25th at 6:00 PM CST.