The Texas Stars continue their seven game road trip against the Cleveland Monsters in a Friday first game of a back-to-back matinee that begins at noon CST. Coming off of a shootout loss against the Milwaukee Admirals, the Monsters are deadlocked with three other teams for third place in the Central division. The Monsters are having to get their production by committee as several of their players, such as Tyler Motte and Jordan Schroeder, have been bouncing back and forth between Cleveland and their parent club Columbus Blue Jackets. Watch for Brad Thiessen (.900 SV%) to get the start in goal. AHL journeyman Carter Camper leads the Monsters in scoring with 10 points. 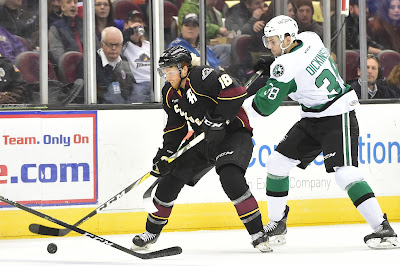 The Texas roster received a major boon in terms of personnel and will be heading into Cleveland with a fuller deck than they've had as of late. The Dallas Stars have recalled Julius Honka and reassigned Texas captain Curtis McKenzie, along with Mike McKenna. Landon Bow will likely draw the start due to his strong game against Chicago, making 31 saves on 32 shots. Phillips Desrosiers, who had been backing up Bow, will be sent back down to the Idaho Steelheads (ECHL).

Jason Dickinson continues to ride high for the Stars. He was responsible for the quick overtime period against the Chicago Wolves on Wednesday night when he scored less than 30 seconds in. Watch for Dickinson to continue to put up numbers as he makes a case to stick with Dallas full-time. Texas will likely lean on Dickinson and McKenzie to generate scoring, but could definitely use any secondary scoring to help them improve upon this current road trip (1-1-0).