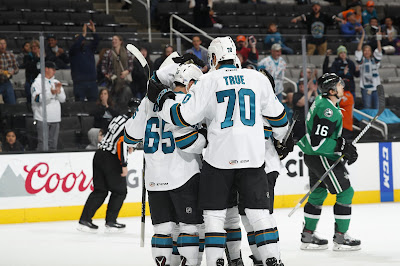 
The Texas Stars took to the ice against the San Jose Barracuda on Sunday evening looking to clear out the irritations that undoubtedly accumulate after two straight losses. Texas last faced San Jose eight days ago in Cedar Park, a bout in which Texas points leader Travis Morin sealed the game for the Stars in a shootout.

In a game that seldom seemed to be played at even strength, the Stars had every opportunity to juice their woeful power play, but they only scored one goal on six opportunities, and went three for five on the penalty kill.

Playing their third game in four nights, Texas didn't come out of the gate like they wanted, and amassed three penalties in the first period. The first, committed by Gavin Bayreuther, was within the first two minutes. Mike McKenna made a couple of saves on shots from the slot, and the Stars didn't allow anything else. Later in the first period, after several minutes of neutral zone give and take, the Stars drew a penalty as Cole Ully took a stick up high. Just before the play, Julius Honka made a critical defensive play on the back check near the slot to ensure McKenna could make a manageable save.

Nothing doing on their first power play, Texas allowed San Jose to pile up the shot totals in the first frame after committing another penalty. This time Marcus Sorenson, who finished the night with a hat trick, made them pay from the slot for his second goal of the year. Ludwig Bystrom answered by helping to get the Texas power play off the snide, beating San Jose goaltender Troy Grosenick on a feed from Matt Mangene.

Sorenson quickly squashed the Stars' momentum and scored his second goal of the night off of a puck that bounced off of Sheldon Dries' skate. San Jose continued to take advantage of the heavy-legged Stars by drawing a third penalty. Swedish winger Filip Sandberg scored on a tip-in, and Texas couldn't seem to get anything going their way. The Stars were outshot 12-6 heading into the first intermission.

Morin had Mark McNeill flanking him at the beginning of the second period for a 2-on-1, but couldn't find twine as Grosenick sniffed it out. The Barracuda gifted the Stars an opportunity with a high sticking minor, but the Stars failed to manufacture one shot with the man advantage. His team down by two, Morin committed a slashing minor giving San Jose their fourth power play of the game. After killing the penalty, Morin attempted to atone by batting a puck out of the air towards the net, but Grosenick made an impressive save.

Later, Roope Hintz hit a post, and the Stars weren't able to take advantage of the couple of good looks they had in the second period. They were awarded their fifth power play for a cross-checking call on Julius Bergman, which would carry into the third period.

Honka ran some point for the duration of the man advantage, and it led to a one-timer from Hintz, but no goal. The Barracuda buried the Stars in the third period with three unanswered goals, the first from Sorenson, who completed his hat trick. The latter two were on the power play and a late period awkward angle shot to send Texas out with a 6-1 loss.

The Stars will stay in California and look to get back on track in the Pacific division as they take on the San Diego Gulls on Wednesday at 9pm CST.