First place in the Pacific division suddenly seems a very realistic goal for the ascending Texas Stars. If they can maintain their current .625 win percentage while waiting on the first place Tucson Roadrunners to catch up to them in games played, the Stars will likely be sitting pretty when the playoffs roll around. Awaiting them in Southern California is a team in the Ontario Reign that bludgeoned them with their size and physicality in their two meetings last week in Cedar Park. The Stars managed to get the split against the Reign whose recent play isn't indicative of their record. 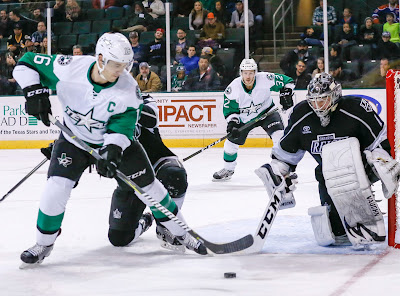 Recording 29 saves on 31 shots last Wednesday in his first victory back in Cedar Park, former Star Jack Campbell got the start for the Reign in the crease. He has had a solid statistical season (.923 SV%) and figures to draw another start against his former club. Defenseman Kevin Gravel and center Mike Amadio both recorded three points in the two games against the Stars last week. On the wing, Michael Mersch remains Ontario's top scorer with 20 points on the season. The Reign currently sit at 14th in the AHL on the power play and 22nd on the penalty kill. Look for the Stars to take advantage when they draw a penalty.

The Stars are coming off a thrilling overtime victory against the Cleveland Monsters in which rookie Niklas Hansson scored his first AHL goal--the overtime winner. They won't be afraid to take the Reign to overtime as they currently sport a perfect 6-0-0 record in extended play. Shane Hanna was called up from the Idaho Steelheads to start for the injured Brent Regner and recorded his first point with an assist. Jason Dickinson's flight did not land in time for him to play against Cleveland, but he made the trip to Ontario and will slot back in the lineup--a huge boon for the Stars. Landon Bow is currently carrying all the water in net for the Stars and that will likely continue on Wednesday night.