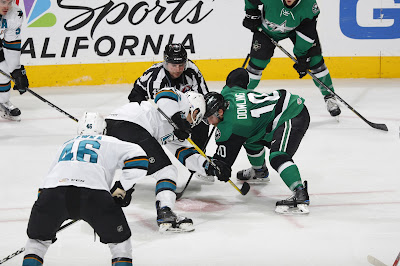 Coming off a disappointing loss in overtime to the Ontario Reign on Wednesday night, the Texas Stars will continue their California road trip as they match up with the San Jose Barracuda for the third time this season. The first of their previous two meetings resulted in a 3-2 shootout victory for the Stars in Cedar Park. In the second meeting, the Stars were pasted to the tune of 6-1 in San Jose. The Stars need a better showing to push for their bid for first place in the Pacific division, especially on the first game of a back-to-back.

The Barracuda are in sixth place in the Pacific, though they've played decent hockey in their last 10 games with a 6-4-0 record. They don't currently possess any point per game players and rely on balanced scoring throughout their lineup. Rookie winger Rudolfs Balcers leads the team in scoring with 19 points. Antoine Bibeau splits time with Troy Grosenick in net, with the former having the better showing of the two this season with a .916 SV%. The Barracuda are slightly below average on the power play but do possess the 4th best penalty kill in the AHL. They are coming off a 3-2 home victory against the Bakersfield Condors, whom the Stars will see on Saturday.

Against the Ontario Reign on Wednesday night, the Stars scored one goal on the power play, penalty kill, and even strength each. Though he didn't score in the last game, Roope Hintz had his share of chances, including one that hit a crossbar. He will be a player to watch, along with his winger Denis Gurianov who had a quite game in Ontario. Landon Bow didn't have his best outing, but figures to draw the start in San Jose with Mike McKenna playing in the second game of the back-to-back against Bakersfield. Leading the team with six power play goals, Curtis McKenzie will have his work cut out for him against the best penalty kill team he and the Stars have seen in a while.