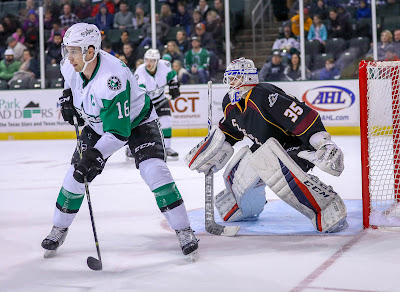 A couple of rookies helped the Texas Stars claim the victory in overtime over the Cleveland Monsters 5-4. Shane Hanna, who was called up from the Idaho Steelheads on Thursday and made his AHL debut in place of the ailing Brent Regner, collected his first AHL point on an assist. Niklas Hansson scored his first AHL goal in heroic fashion in the overtime frame. Landon Bow got the start in net for the Stars and finished with 40 saves on 44 shots. The Stars won the war, but lost the special teams battle as they went 3-for-5 on the penalty kill.

Sam Vigneault, who finished the game with two goals, scored his fifth goal of the year within the first five minutes of the game as he had a point blank chance in front of Bow. Denis Gurianov helped Roope Hintz knot the game up when he threw a puck in front of the net. The puck took a few bounces before Hintz buried it in the midst of a front net scramble. Hanna had the secondary assist on the goal to record his first point in the AHL. The teams traded penalties, and Nick Moutrey for the Flyers scored on the Cleveland power play when the puck caromed off of Dillon Heatherington's skate and into the net.

Sheldon Dries went on the forecheck in the second period and forced a turnover behind the Monsters net. He centered to Mark McNeill, who finished off the play with a beautiful one timer that tied the game at two. McNeill later committed a five minute major penalty when the Stars were on the power play to send the game to 4-on-4. Things took a strange turn and the Stars drew a minor penalty a few seconds into their penalty kill. The shorthanded hockey carried over into the third period.

During some more 4-on-4 action, the puck took a fortunate bounce for the Stars in the third period and glanced off of Monsters goaltender Matiss Kivlenieks' skate. Bodnarchuk, who was on the forecheck, was credited for the goal. Andre Benoit beat Bow cleanly in a high corner as Bow was being screened. On the very next shift, the Stars drew a delayed penalty and Matt Mangene caught the Monsters flat-footed as he sneaked in close to the net for a goal that put the Stars up 4-3.

The Stars went on the penalty kill with a few minutes left in the game and couldn't hold the lead. Vigneault went to the front of the net and was rewarded with his second goal. Monsters leading scorer Carter Camper had the assist. Overtime featured a competitive goaltender duel for the first three minutes. Kivlenieks held his own for the Monsters until the Stars created an odd-man rush that was too much to overcome, and the rookie Hansson won the game.

The Stars will head for the west coast next week and play against the Ontario Reign on December 20th at 9:00 PM CST.