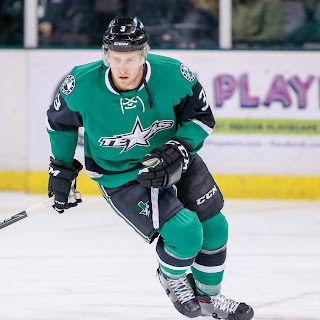 Texas Stars defenseman Dillon Heatherington was recalled by the parent club Dallas Stars on Saturday. Dallas has been trying to get one of their top blue-liners Marc Methot healthy, and it appears it will take another couple weeks. Heatherington will slot in as the seventh defenseman in Dallas. The recent Texas Stars acquisition of Michael Paliotta from the Toronto Marlies came in a timely fashion to help them maintain their depth on the blue line.

Here is the official release:

Heatherington, 22, has registered 13 points (3-10=13) in 39 games played for Texas this season. His three goals match a career-high in the AHL, which he accomplished in each of the previous two seasons. This is his third full professional season, and he has appeared in 165 career regular-season AHL games in parts of four seasons with Springfield, Lake Erie/Cleveland and Texas. He was part of the Calder Cup winning Lake Erie Monsters in 2016.

The 6-foot-4, 225-pound native of Calgary, Alta. was acquired by Dallas from Columbus in exchange for Lauri Korpikoski on March 1, 2017. He was originally selected by Columbus in the second round (50th overall) of the 2013 NHL Draft.