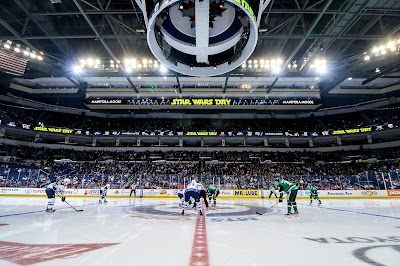 The Texas Stars pick up their road trip again as they head to Winnipeg to take on the Manitoba Moose. Scoring has been hard to come by for the Stars in the past two games, though their goaltending has held together nicely. The sledding has been tough overall for the past 10 games (2-4-3-1), and the competition couldn't be stiffer for them to try to put together some kind of positive streak.

One positive that has yet to materialize in improved play is the overall health of the team. They will only be without Dillon Heatherington (call-up) and will likely have to rely on secondary scoring to make a dent in this game. Look for players like Brian Flynn (23 points), Denis Gurianov (15 points), or Roope Hintz (20 points) to potentially contribute. All things being equal, and coming off considerable rest, Landon Bow is the starter in net.

The Moose are tearing through the AHL this season and are a virtual lock for the playoffs. They've cooled off a bit as of late (5-3-2 in last 10), but they remain one of two teams to still have single digits in the loss column. They have plenty of offensive firepower, sporting three players with 35 points in Buddy Robinson, Jack Roslovic, and rookie Mason Appleton. Just behind them with 31 points is center iceman Nic Petan. Goaltender Michael Hutchinson, who has spent considerable time in the NHL, is having an outstanding season with a .942 SV% and is only allowing 1.94 goals per game. They will be a load to deal with.