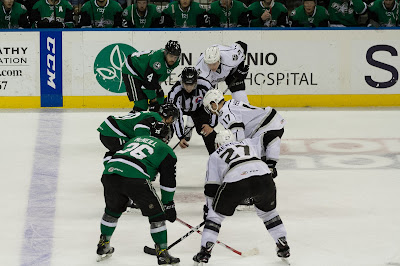 Game three of the current road trip for the Texas Stars will see them take on the Ontario Reign in southern California. Things have been less than ideal for the Stars lately, with a 3-4-3-0 record in their last 10 games to prove it. The Ontario Reign have been slightly better, going 5-4-1-0, but sit just below the Stars in the Pacific division standings. You'd have to think that the Reign can sense a major opportunity to get their season back on track and gain some ground in the standings. In their three games against the Reign this season the Stars have posted a 1-1-1-0 record.

The offense for the Stars lately has been rather bi-polar. They couldn't seem to miss the back of the net on Friday night in Stockton, winning 7-2. They followed that up with a shutout loss the next night to the same team. They'll need more consistency against a big, physical team that would love to leap-frog them in the division. The Stars will once again be without Dillon Heatherington as he is in Dallas providing depth for the parent club. Look for new acquisition Michael Paliotta to continue to be a fixture in the lineup. Jason Dickinson, who had a three point game in their victory over the Stockton Heat, will help ensure his team isn't shutout a second game in a row. Stars captain Curtis McKenzie has been a point per game player for Texas and will be relied upon heavily to finish plays.

The Reign are led in scoring by Mike Amadio (33 points), and is followed by Michael Mersch and Matt Moulson. All three have registered points against the Stars in their three matches this year. Former Texas Star Jack Campbell started both games against Texas in Cedar Park, but rookie Cal Petersen was in net for the game in Ontario. It is unclear who draws the start, but my money would be on Petersen as it appears that they are doing an even split in sharing the net.