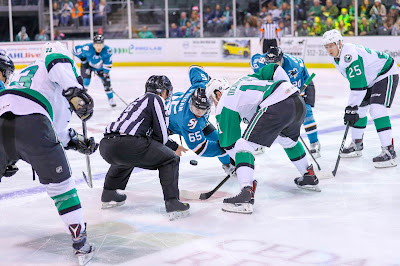 The Texas Stars have experienced an offensive Renaissance of sorts over the past couple of games and just might be trending in the right direction. They beat the league-leading Manitoba Moose thoroughly in a weekend pair that saw the Stars outscore them by four goals in both games. Finally at home after a long road trip and with sole possession of second place in the Pacific division, the Stars will face the San Jose Barracuda to give them an opportunity to continue their push up the standings.

Jason Dickinson, who had two goals in the Manitoba game last Saturday, has been called up to the Dallas Stars as Martin Hanzal has struggled to stay healthy. Texas can absorb the temporary loss if they can keep clicking on offense. Stars captain Curtis McKenzie is on an absolute tear with five points from last weekend (3 goals, 2 assists). Travis Morin picked up two more assists to add to his league leading total (35). Landon Bow recorded his first career AHL shutout during Friday's game and figures to get the start in net.

The Barracuda rise and fall with the play of AHL All Star goaltender Antoine Bibeau. He's posted a .922 SP in his 21 stars and will likely play. Rookie forward Rudolfs Balcers leads the team in points (25), though San Jose is a team that doesn't pack much firepower. The Stars' woeful penalty kill (28th ranked) can perhaps see some improvement against the 26th ranked Barracuda power play. Unless Bibeau shuts it all down, look for the Stars to carry some positive momentum into this game.