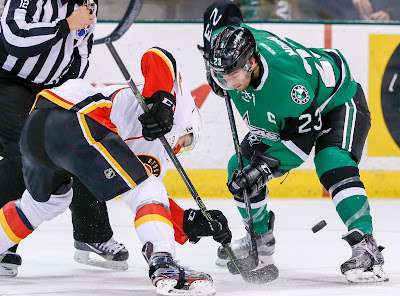 On the second game of their current road trip, the Texas Stars unbottled their offense picked up a much needed 7-2 win over the Stockton Heat--a divisional foe that the Stars are chasing for playoff positioning. The victory moved the Stars past the San Antonio Rampage for fourth place in the Pacific division with the Rampage losing to the Milwaukee Admirals.

Michael Paliotta made his debut on the blue line for the Stars, but the story among the defensemen was Brent Regner finishing with two goals. Jason Dickinson also had a big game with one goal and two assists. Landon Bow finished with 24 saves on 26 shots.

Rookie net-minder Tyler Parsons made his AHL debut in the crease for the Heat and withstood some testing early in the game when the Stars were peppering him with pucks, though it didn't last. The Stars got the screen they needed on the first Regner goal from the point to find the gap in Parsons' net.  It was critical that the Stars get on the board first with the Heat being known for fast starts.

Texas had all of about three minutes to relish the goal. Luke Gazdic capitalized when Regner fell down and scored an unassisted goal to tie the game.

With nothing going on the power play after three attempts into the second period, Jason Dickinson scored at even strength just after the third Stars power play expired. Denis Gurianov, who's struggles this season have been well documented, was the benefactor of a great Dickinson pass that found him next to the net for an easy tip in goal.

In the third period, the Stars continued to blemish Parsons' debut with three consecutive goals before the Heat would score late on the power play. Samuel Laberge scored his third goal of the year. Roope Hintz got in on the scoring action with a power play goal that was set up by Niklas Hansson. Finally, Regner scored his second goal to put the Stars up 6-1 to completely nail the door shut on a Heat comeback.

After Morgan Klimchuk posted power play goal for the Heat, Justin Dowling answered on a set up by Brian Flynn.

The Stars will play against the Heat again on Saturday evening. The puck drops at 8:00 PM CST.