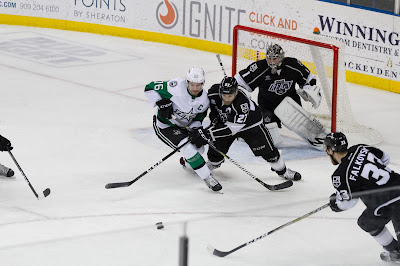 The Texas Stars were down twice in the third period but clawed back both times to force a shootout. In the end, they lost to the Ontario Reign 3-2. Former Star Jack Campbell started in goal for the Reign and finished with 29 saves on 31 shots.

As usual, the Ontario Reign played a physical brand of hockey that often crossed the line beyond competitive play. The Stars were able to benefit with three first period power plays, but to no avail. Phillipe Maillet put the Reign up 1-0 with a quick goal off of a won face-off draw that beat Landon Bow cleanly. Bow had a solid outing and finished with 36 saves on 39 shots. The Reign outshot the Stars 13-6 in the first period.

Tempers flared in the second period, and Ontario's Austin Wagner was looking for anyone to pick a fight with. He found a willing partner in Colin Markison to draw offsetting fighting majors. Bokondji Imama also scraped with Samuel Laberge later in the period as the game threatened to get really ugly. Things did not pick up offensively for the Stars, and they were outshot by the end of the middle frame 26-15.

The Stars finally got on the board and ended the scoring drought for the Stars going back to last game with a Travis Morin goal. The Stars won a puck battle behind the net and centered to Morin who was waiting in front of the net. The Reign had a quick answer. They pinned the Stars in their own zone and got a back door goal to go from Mike Amadio.

With 1:02 left in the game, Justin Dowling scored his sixth goal of the season to tie the game when the Stars went 6-on-5. He finished the play after the puck rebounded off Campbell twice. The Stars drew a penalty 19 seconds into overtime play to give them a huge chance to put the game away on 4-on-3. They were caught too many times looking for the perfect pass and didn't generate many good looks.

Campbell was perfect for the Reign during the shootout, stopping Morin, Brian Flynn, and Curtis McKenzie. Amadio had the lone goal to give the Reign the victory.

The Stars will pick their current road trip back up on Friday as they travel to Canada to take on the Manitoba Moose. The puck drops at 7:00 PM CST.