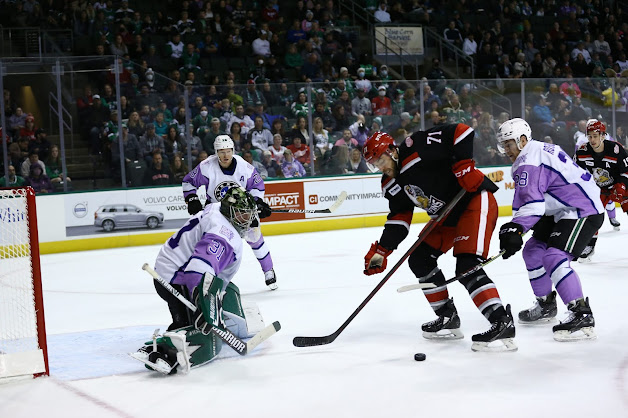 The Texas Stars didn’t let the disappointment of giving up two goals to tie things up in the last five minutes of regulation get to them at H-E-B Center.

Instead, the Stars rallied to win 4-3 in overtime Saturday against the Grand Rapids Griffins behind Adam Scheel’s first start of the season, in which he stopped 31 out of 34 shots for a 0.912 SV%.

Ben Gleason sank the game winner, sneaking it just past Griffins goaltender Calvin Pickard after a patient pass from Ty Dellandrea in the Stars’ first true opportunity in 3-on-3 play, just 27 seconds into overtime.

Not much of a better moment for the defenseman to pick up his first goal of the season.

After head coach Neil Graham was not pleased with his team’s start Friday, where the Stars fell behind 3-1 to Grand Rapids, Texas came out with a lot more urgency Saturday.

“(It was) night and day in terms of our readiness,” Graham said.

Scheel got the start in goal after coming in to replace goalie Colton Point after the first period of Friday’s matchup.

Just as in his first minutes of the season Friday, he didn’t see much action early. The Stars outshot the Griffins 7-1 to start the first period.

And five minutes into the game, on Texas’s first power play of the night, Riley Damiani buried a shot into the right corner through the narrowest of windows created by four Grand Rapids skaters.

The Griffins responded: controlling much of the rest of the first period with a 16-8 shot margin after the Damiani goal, including drawing a penalty seconds afterwards. But Scheel turned away shot after shot as Grand Rapids attacked his glove side relentlessly with no success.

Oskar Back added another for the Stars with just under three minutes left to play in the first. A rebound off the right pad of Grand Rapids goaltender Calvin Pickard ricocheted straight to Back, who went five hole to put the Stars up 2-0.

The Griffins wouldn’t go away quietly. A minute later, Grand Rapids’ Kyle Criscuolo found his teammate Jonathan Berggren right in front of the net with a pass that somehow found its way through both Thomas Harley and Alex Petrovic.

Josh Melnick added a short handed insurance goal in the only goal of the second period in a pure effort play.

The Star’s speed and determination caught a Griffins’ defender off guard, giving Melnick a breakaway opportunity he created all himself. And he capitalized, putting one behind the right shoulder of Pickard for a 3-1 Texas lead.

The rest of the second period was a back-and-forth affair that culminated in a rare double fight after a big Fredrik Karlstrom hit.

The Stars, playing without Harley and Dellandrea for a chunk of the third period, didn’t miss a beat: continuing their solid second period play for the first half of the third.

Texas turtled with about eight minutes left, trying to hold onto its 3-1 lead. As Grand Rapids spent extended time in the o-zone, the Stars played physical, defensive and in control.

But the shell broke with 4:30 left in the third period. First, it was a beautiful play by Turner Elson to break a defenders’ ankles and feed his teammate Kyle Criscuolo just on Scheel’s right.

Then, a fluky bounce off a Jonathan Berggren shot gave the Griffins skater an opportunity to tie it up.

But the Stars didn’t let giving up their regulation win stop them in overtime.

“We controlled the first majority of the play in the first 14 minutes,” Graham said. “Unfortunately, we bent in the final five. But it’s a good thing we didn’t break. We kept our resolve, stayed calm.”

After the last four games, all at home, went shootout loss, shootout win, overtime loss and overtime win, the Stars leave Texas to go up north for a four-game road trip.