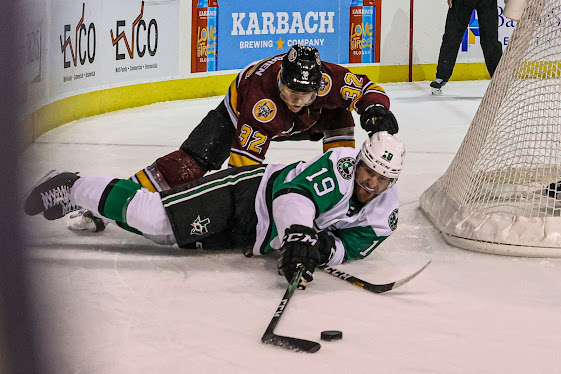 The Texas Stars came into Sunday's game against the Chicago Wolves looking for their first win of the three-game series after a devastating 4-3 overtime loss Saturday. Instead, the Stars came out with their third straight loss: a 7-2 loss at H-E-B Center that quickly unraveled in the second and third periods.

For the first time against the Wolves this series and season, Texas was able to get on the board first.

Ben Gleason took only 45 seconds to put one past Wolves goaltender Eetu Makiniemi as the defenseman collected his third goal of the season to put Texas up 1-0 with a slick evasive move before sinking a shot in the top right corner of the net.

Then, it was the Gleason and Drury show for the rest of the period. Gleason sat for high-sticking.  Chicago's Jack Drury sat for slashing. And both skaters traded several shots on goal, leading their respective teams in shots in the period, before Drury finally snuck one past Stars goaltender Adam Scheel.

At 13:20 into the period, he slid one off and then under Scheel's right pad that didn't make it to the goal at first. But, a Texas defenseman trying to clear the puck allowed it to trickle in for a goal to tie things up. After the goal, at the end of the period, the Stars would breath a sigh of relief as Chicago put on a barrage of shots on high-quality chances but couldn't find the back of the net, outshooting Texas 13 to 10 on the period and winning the faceoff battle 14 to 8.

Then, in the second period, the Wolves began to find the back of the net. Texas continued to be on the back foot, accumulating four penalties for eight PK minutes.

"It's hard to play the game fast and offensively-minded at points when you've been on your heels killing as much as we did in that period," head coach Neil Graham said.

But it was after the Stars' first power play of the second period that Chicago would score the goal to put the team up 2-1. After a pass snuck between the middle of two Texas defensemen, Chicago's Stefan Noesen found himself one-on-one against Scheel and capitalized on the golden opportunity: rifling one past Scheel's left shoulder.

Then, after three near-perfect penalty kills from the Stars, Noesen finally cracked open the Texas defense on the power play. A rebound off a C.J. Smith shot found its way to Noesen, who picked up his second goal of the game to get to double digits on the season with 10 goals.

Texas spent more than half of the period on special teams, and the fans showed their displeasure with the officiating at the start of the third period as the officials skated out after the break.

"It's a bit difficult to get everyone in the game with all the special teams," Ty Dellandrea said. "We were on the PK a lot, which kind of got us out of rhythm with our lines and didn't get a lot of shifts together. So it's not an excuse, but I think it just kind of fell apart as it went on.

But the Stars would have their own golden opportunity to start the third period: the Wolves were called for two consecutive penalties to give Texas a one and a half minutes of 5-on-3 play.

Then, the Stars put up a big fat 0, failing to get past a turtled Wolves defense.

Texas' struggles continued to snowball, with Josh Jacobs scoring shortly after the failed 5-on-3 opportunity and Drury getting on the board once again just minutes later.

Down 5-1, Rhett Gardner picked up his first goal of the season on a penalty shot, breaking a season cold streak with a solid shot past Makiniemi.

But the Wolves didn't let up, scoring twice in a minute to put the finishing touches on a dominating weekend over the Stars.

Riley Damiani lost his nine-game point streak while Dellandrea pushed his to six with an assist on the opening Gleason goal.

The Stars will continue their extended homestand with a Friday and Saturday back-to-back against the Rockford Icehogs next weekend.

"No one's feeling sorry for us, and there's no time to do the same and feel sorry for ourselves," Graham said. "We have to get back to work."