Rockford, IL - The Texas Stars 2021-22 season came to a close in the cruelest of ways as the Rockford IceHogs (Chicago Blackhawks affiliate) completed their two-game, first round sweep with a 1-0 win in overtime. Rockford advances to face the cross-town Chicago Wolves in the second round of the Calder Cup Playoffs, while the Stars are left to wonder "what could have been".

Dylan McLaughlin scored 56 seconds into the overtime to seal the victory in support of an incredibly hot IceHog netminder Arvid Soderblom who finished the night with 36 saves to carry Rockford to their first playoff series win since 2018.

Texas' goaltender Matt Murray went blow-for-blow with Soderblom, turning away the first 31 shots he saw until McLaughlin's game-winner in the opening minute of the extra-session.

Texas came out of the gate strong, dictating the pace of the entire first stanza. The Stars had an opportunity early in the game to take control as they went on a power play due to a Wyatt Kalynuk roughing call but were unable to find the twine with either of their two shots on the job.

The second started very much like the first. Texas picked up where they left off and just as in the opening period, the Stars got a chance on the power play early in the period when Isaak Phillips was called for a cross check.

Rockford killed off the penalty, allowing just one shot, then with the momentum seemingly going in their direction, the IceHogs picked up the pace, rattling off five consecutive shots while cutting off Texas' chances to even get through the neutral zone as the teams approached the midway point of the game.

Texas and Murray withstood the barrage and looked to take the momentum back as Ty Dellandrea and Wednesday's goal-scorer for the Stars Frederick Karlstrom got off multiple shots on Soderstrom only to come away empty each time.

Just as Texas began to take back control of the period, Oskar Back was uncharacteristically called for a hook, sending Rockford on their first power play of the evening. Back, a 2018 third-round draft pick of Dallas, was only called for four infractions in 71 games playing in his first season in North America.

The Stars penalty kill unit bent but did not break, allowing three IceHog shots on the advantage, including two in succession from Evan Barratt that Murray ultimately suffocated.

No sooner had Texas killed off the penalty, they were put back on the job when Curtis McKenzie was called for a cross check less than 30 seconds later. The PK looked better this time around, holding Rockford to a single shot late on the job, to close out the period with the teams still knotted in a scoreless tie. The IceHogs outshot Texas 12-11 for the period. 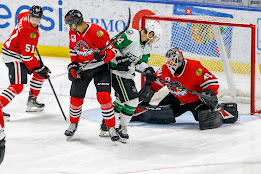 The third period began with Texas appearing to have a little extra jump in their step, clearly playing with purpose. With their entire season was on the line, the Stars went aggressively at the net, peppering Soderblom repeatedly over the opening minutes of the third. Texas got good looks from Ryan Shea and Karlstrom as they outshot Rockford 7-1 in the first 3:24 of the period.

Texas' early third period chances came to an abrupt halt however when McKenzie got tangled-up with Lukas Reichel and sent to the box again, this for a hold.

The Stars were able kill off the power play but not without a fair share of threats, including two from McLaughlin from point-blank range that Murray swatted away. While Texas held Rockford scoreless on the three power play shots they faced, momentum had clearly swung Rockford's way.

The IceHogs then proceeded to take over, holding Texas without a shot for over eight minutes as they parked in the offensive zone. At one point Rockford spent two-and-a-half consecutive minutes in their offensive zone, completing three separate line changes on-the-fly in the process, without a whistle. The IceHogs reeled off nine consecutive shots in the third before Jerad Rosburg finally got one tepidly on goal that Soderblom kicked away.

The Stars, and Murray, withstood the biggest test of the game to that point and kept his scoresheet clean the rest of the period. Rockford outshot Texas 13-6 in the third and the teams headed off to get a breather before embarking on overtime playoff hockey.

The game came to an anticlimactic end just 56 seconds into the extra frame when Rockford brought the puck into the offensive zone and got themselves set on the perimeter. The IceHogs went around the horn before Ian Mitchell sent a tape-to-tape pass to Isaak Phillips, who fed McLaughlin at the top of the left circle who then fired his shot through traffic past a frozen Murray, bringing a sudden halt to Texas' Calder Cup hopes as well as their season. 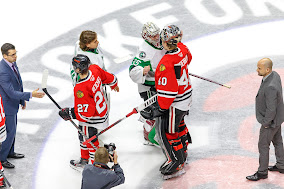 McLaughlin's heroics sent the 5,327 in attendance into a frenzy and as the IceHog's celebrated, the entirety of the Stars, led by their captain McKenzie, consoled their rookie netminder.

With the victory, Rockford advances to the Central Division Semi-Finals where they will face the cream of the AHL crop, the Chicago Wolves. While they will be the clear underdog against the class of the league Wolves, if they can continue to get hot goaltending from Soderblom who finished the opening round saving 69-of-70 in the two games and was easily the MVP of the series.

The Stars season comes to a close with the heartbreaking loss after an incredible run just to get into the playoffs. Texas spent a total of 97 consecutive days in last place in the division before going 8-3-1 over the final three weeks of the season, qualifying for the postseason on the final day of the regular season.

The team was really hoping to win this series, if not just to play another in front of the home crowd. Unfortunately for the Texas Stars, that won't be until September.

Comeau (injury, has not played)

Khudobin (injury, out for season)