Cedar Park, TX- The Texas Stars returned home after a grueling six-day, eleven-day, four-city road trip in victorious fashion as they tripped up the defending Calder Cup champion Chicago Wolves 5-2 in front of 6,014 Friday night at the H-E-B Center at Cedar Park. Friday was also the annual Teddy Bear Toss.

Texas dominated from beginning to end, receiving a goal each from Riley Tufte, Riley Barber, Fredrik Olofsson and a pair from Curtis McKenzie while netminder Matt Murray turned away 17-of-19 Chicago shots to earn the win.

"We'll take the two points." Texas head coach Neil Graham said after the game. "It was a battle to the end and I thought our guys played our way and stayed in the fight and did their job tonight and it was a good two points."

For the third straight game Texas opened the scoring when Tufte sent the teddy bears flying after taking a back-door pass from Thomas Harley to give Texas a 1-0 lead 8:58 into the game. Forward Rhett Gardner was also credited with the first of his two assists on the night. 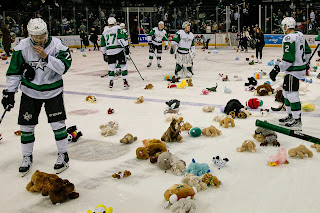 "That was big." Graham said of McKenzie's goal after the teddy bear cleanup. "We've all been in some of those situations where they can act as a timeout for the other team. You almost have to come back with the zero-zero mindset." Graham continued. "I thought our guys did a good job right after the teddy bear toss."

Texas looked to maintain their advantage to the intermission, but just over a minute later the Wolves cut the deficit in half when Alexander Pashin scored on a breakaway with 3:54 left in the opener to make it 2-1. The Stars took that lead to the intermission after having outshot Chicago 12-8 in the period.

Texas dominated the second period, outshooting the Wolves 11-2 for the frame, however Chicago got the game back level on their first shot of the period when Blake Murray wristed one past Stars netminder Murray to knot the game at 2-2 with 4:05 left in the second.

Not to be outdone, Texas regained the lead before the period could end when Barber netted his team-leading 12th goal of the season, taking a juicy rebound off of a Thomas Harley shot and burying it past Sawchenko with 2:31 left in the middle frame to give Texas a 4-2 lead that they would take to the second intermission. The Stars had a 23-10 shot advantage after two periods of play.

Just 4:10 into the third, Olofsson gave Texas a two-goal cushion when he took a Tufte pass and one-timed if off of a Wolves defender and into the back of the net to make it 4-2.

Chicago attempted to come back with their best shooting period of the game but could not meet the challenge. The Wolves went empty-net with just over two minutes left but the extra attacker did not help as McKenzie had a layup goal with 54 seconds left to seal the game's 5-2 final.

Texas finished the night outshooting Chicago 32-19, while each team went 0-for-3 on the power play. Texas' penalty kill is currently ranked number one in the entire AHL.

With the win, Murray improved to 4-4-1 on the season while Sawchenko took the loss, stopping 27-of- 31 shots he saw.

The teams don't have much time to reset as the teams face each other again Saturday night for the second game of the two-game series. The rematch is set for a 7:00 p.m. faceoff at the H-E-B Center at Cedar Park.

Tonight's attendance was 6,014 not including the 1,704 teddy bears collected.