Posted by Stephen Meserve on September 20, 2010 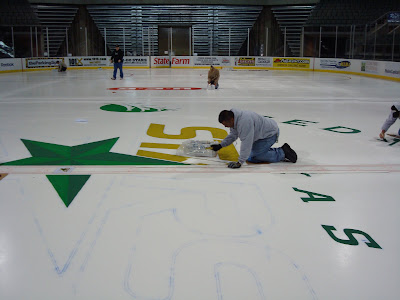 As many of the Texas Stars prepare for the season in training camp in Prince Edward Island, the facilities crew at the Cedar Park Center has been hard at work preparing the facility to host American League hockey games once again.

The process of laying down the ice, which was taken out after the conclusion of the Calder Cup Finals against the Hershey Bears, began last week. The surface, which is a base sand layer that includes the cooling elements, is made of cement. The cement is covered with an initial layer of ice and then whitewashed to give it a blinding bright sheen. With another small coat of water is laid down and then comes the part that I was involved in.

Putting down all of the logos, lines, dots, and other markings on the ice is a painstaking multi-step process. Luckily, the crew at the Cedar Park Center had some volunteer help this past Saturday in the form of several able-bodied amateur league adult hockey players. 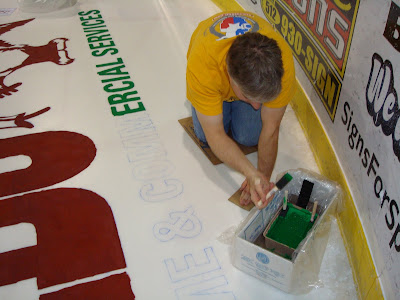 The facilities team had already stenciled out the logos and lines as required when the crew arrived on Saturday morning. All that was left to do was color inside the lines using special Jet-Ice brand ice paint and foam brushes. To make the task more difficult, the ice was, at this point, only 1/32 of an inch thick. This meant that there could be no direct contact between the ice and any part of the body that would cause heat transfer. As the Arkansas vs. Georgia game blared on the Jumbotron above, painters moved around their masterpieces on islands of cardboard to prevent the ice from melting under them.

Drips and drops were cleaned up and straight lines perfected with a scraper. After each item was completed, it was sealed by misting it with water. 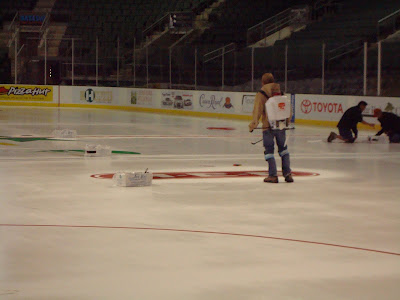 The facilities team will still need to flood the rink with one inch of water to complete the job. With all of this work, the Texas Stars are just one more step closer to returning for their second season in the Cedar Park Center.
hockey in austin

The Texas Stars are getting a big post-trade deadline present from the Dallas Stars in the form of former captain Justin Dowling. The long-time Texas center has spent the entire season in Dallas but hasn't played since January 29 and has been on the injured list recently.

The Alberta native can help juice the power play, tighten up the penalty kill and provide key veteran presence. He will be available for tomorrow's game against Rockford and wearing #15.