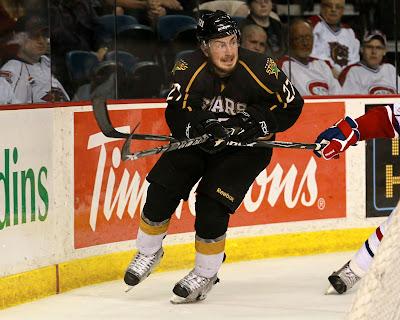 In an effort to get more great content out to you guys, I'm going to be starting up a feature called "Quick Hits". During postgame interviews, I'll often ask one-off questions like the ones below to get some insight on topics other than the game that was just played. As I collect these, I will post them here and hope you find them interesting.

Coach Gulutzan on the play of rookie Tristan King this last week. King has three points in his last 3 games for the Stars.

"[Tristan] played hard, and he's coming along. He going to be a good player down the road. He's got lots to learn but he's a real sponge and he's got heavy skill. Once he learns more about the pro game, he's going to be a really good player."

Greg Rallo on his experience at the Dallas Stars training camp. Rallo played in one game in the preseason against Tampa Bay, recording two shots.

"It was amazing. It was a great chance for me to get up there and play with those guys and see where I match up. To get a game also against Tampa was awesome. It was the first time for me playing an NHL preseason game so I really enjoyed it and just tried to take it all in."

Travis Morin on his experience at Dallas Stars training camp. Morin played in the Stars 5-2 victory over the St. Louis Blues, recording a goal on his only shot. His goal was assisted by Texas Stars teammates Tomas Vincour and Philip Larsen.