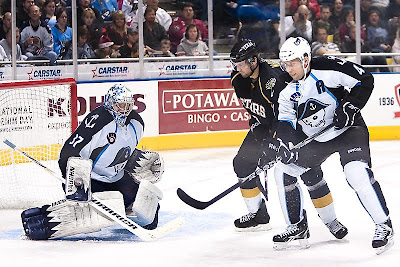 Francis Wathier battles for a rebound with Milwaukee Admirals defenseman Scott Ford in last Saturday's 3-2 OT win in Wisconsin. (Credit: Chris Jerina)
Left winger Francis Wathier had a pretty crazy week last week, being called up to Dallas on Monday and returning to play in Tuesday night's game on his birthday:

"I got the call Sunday night. I was having dinner with my wife, my son and some friends. So I got home pretty excited. I took the plane early on Monday, a 5:45 AM plane. I had to get up at 3 AM so it was pretty interesting. I practiced, warmed up but didn't dress. Getting the call is always a good thing because they're thinking about you. They're rewarding you for playing well."

On the four games in five days road trip:

"It's pretty crazy, but that's fun. We're going to play a lot of hockey, so we can't complain. We play hockey for a living, so that's always a good thing. The main thing is to get some rest tonight to rest up for tomorrow. Grand Rapids, Milwaukee, Grand Rapids... that's going to be interesting: a lot of time on the bus. That's where all the guys communicate, spend some time, have a few laughs, and maybe a few card games. Can't complain; it's a good time with the boys."