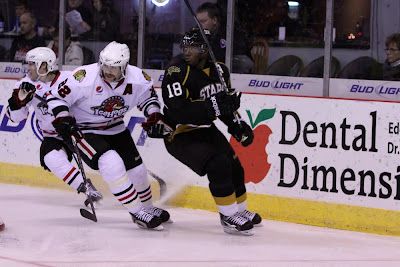 Maxime Fortunus, pictured here in a game against the Rockford IceHogs on December 8th, says the team is ready for the home stretch. (Credit: Kris Gray)
The story of the year for the AHL playoff race is certainly the tightness in the Stars' West Division. For at least the past month, there has been a separation of at most 7 points between 7th and 1st place.

Texas has been on the short end of the stick for most of the season in the standings. Despite picking up points at a 60% pace, Texas was stuck for most of the time technically "out" of playoff contention thanks to a low number of games played and the general competitiveness in the West. "It seemed like everytime we won, so did everyone else," said Stars defenseman Maxime Fortunus.

This weekend's three game win streak changed that, at least for a little while. With two of the games coming against the division, including the important game against Milwaukee, Texas was finally able to gain some ground on the West. Sitting in sole possession of third place, the Stars feel much more in control of their playoff destiny now that they can see their effort being rewarded in the standings.

Tonight's divisional game between Milwaukee and Houston, both tied for first with 71 points, begins a rash of important divisional games. Texas plays Peoria tomorrow while Milwaukee visits Oklahoma City. "It's going to be like this until the end of the year," said Fortunus. "It might come down to the last game."

On the other side of the coin, if the Stars go on a losing streak, they could just as easily miss the playoffs as make them. "We have to be ready to fight until the end," added Fortunus.

"We take every game from here on out as a playoff game."
analysis playoffs