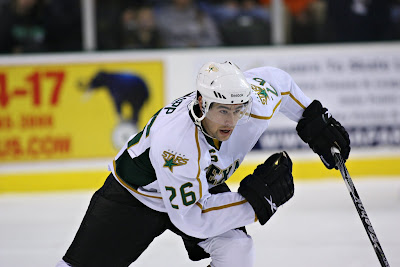 Cody Chupp was brought in on an amateur tryout contract at the end of last season and signed a standard player contract for the 2010-11 season. (Credit: Byrd/Texas Stars)
The NHL trade deadline is behind us and that means the AHL Clear Day is coming fast. The AHL has announced Clear Day as Monday, March 7th at 3 PM EST. For those of you who don't know or don't remember, here is the rundown from the league on what Clear Day is:

Each Clear Day roster consists of a maximum of 22 players. According to AHL by-laws, only those players listed on a team’s Clear Day roster are eligible to compete in the remainder of the AHL regular season and in the Calder Cup Playoffs, unless emergency conditions arise as a result of recall, injury or suspension.

Teams may also add signed junior players or players on amateur tryout contracts, only after their respective junior or college seasons are complete.

This brings up the very valid question of possible amateur tryout (ATO) signings and “Jamie Benn” style assignments around the league.

For Texas, this year there will be no Jamie Benn type players, as the Stars had no outstanding rookies in their roster and will, more than likely, be playing for the Stanley Cup. The most troubling possible assignee for the Stars is Edmonton’s Taylor Hall. However, Hall is too young for an assignment to the AHL; players must be at least 20 years old for assignment. This also saves the AHL West from a possible assignment by Atlanta of rookie phenom Alex Burmistrov, to the Chicago Wolves.

This transitions us to ATOs. Any player who has yet to play a professional game is eligible the playoffs through an ATO. Last year’s ATO signees include Cody Chupp and Tyler Ludwig, both of whom were signed on for this year over the summer on standard player contracts. Neither of those signings had an external tea leaves to read, but this year, the Stars have a few obvious possibilities in the ATO role.

First, there is the recent Dallas signee, Brenden Dillon. Dillon is an offensive defenseman with a penchant for pugilism. This year alone he has 6 goals and 46 assists to go with 128 PIMs in 64 games. His Seattle Thunderbirds are in last place in the WHL’s West Conference and unlikely to make the playoffs. The last regular season game for the team is March 20th, after which he would be eligible for an ATO.

Another possible signee is Dallas’ 2009 first round draft pick, Scott Glennie. Glennie, who has lit it up for the Brandon Wheat Kings this season with 32-49-81 in 63 games, is likely to be in the playoffs in the WHL. The Wheat Kings are currently in 7th place in the East with seven points separating them from 8th; the top eight teams in each conference make the playoffs. Therefore, Glennie may not be available to be signed until later, but his scoring touch could be a valuable addition to the Stars lineup.

Of course, Scott White certainly has his eye on other prospects that we haven’t even heard of yet. Keep watch on the transaction log, and I will let you know of what I hear as we move closer to Monday.
analysis playoffs